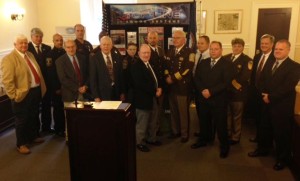 Bedford County, VA Sheriff Mike Brown, Chairman and Co-Founder of the Safe Surfin’ Foundation, a 501(c)(3) non-profit which provides Internet safety materials for schools, parents and more, has successfully raised funds to supply six law enforcement agencies ballistic protection they otherwise would not have been able to acquire.

“This program has already donated new vests to officers and deputies throughout the country,” says Sheriff Brown, “and I pledge to put ballistic vests on as many of our law enforcement brothers and sisters as humanly possible.”

As a surprise, Sheriff Brown also announced that thanks to an asset forfeiture grant with the help of the Virginia Attorney General’s Office, over 500 ballistic vests will be placed on the backs of law enforcement officers in Virginia.

As background on this announcement, Sheriff Brown met a young West Virginia trooper who had survived three bullet wounds from a suspected online child pornographer. Brown questioned why the trooper was not wearing his vest. The trooper did in fact have a vest; however, since he was interviewing the suspect, whom he had interviewed before, the trooper did not see the need to put on his bulky, uncomfortable ballistic vest.

This story prompted Sheriff Brown to further investigate ballistic use and availability to all law enforcement, with the hope of promoting the wearing of ballistics in every situation, no matter what type of investigation they may encounter. Much to his surprise, Sheriff Brown learned that over 220,000 law enforcement personnel in the country, due to budget restraints, do not have ballistic protection to wear at all.

“I don’t know how a councilman or board of supervisor member can sleep at night knowing that their ‘protector’ is up against the criminal element without this protection,” adds Sheriff Brown.

Brown, with foundation funding partner Moose International, began a nation-wide effort to raise funds to purchase ballistic vests for those departments who have but no choice than to allow their officers to work without any protection. With the help of Top Line Armor Systems, OH, the Safe Surfin’ Foundation is supplying these life saving ballistic vests to police, sheriff’s deputies and college campus police across the country.