Spotsylvania Sheriff’s Office is a 2013 National Night Out Winner 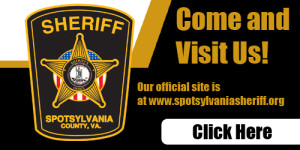 Spotsylvania, VA – It is America’s Night Out Against Crime, and this year the Spotsylvania Sheriff’s Office, led by Sheriff Roger Harris, was selected as a National Award Winner for its outstanding participation in the 30th Anniversary National Night Out. Spotsylvania placed in the 100,000-299,000 population category.

National Night Out is a nationwide crime and drug prevention awareness program that provides a unique opportunity for Spotsylvania County to join forces with thousands of other communities across the country in promoting cooperation with police and community crime prevention efforts. The nationwide event is coordinated by the National Association of Town Watch, and is sponsored each year by Target stores and the U.S. Department of Justice Bureau. Nationally, millions of people have participated in prior years.

The 2013 event involved 37.8 million people in 16,124 communities from all 50 states, U.S. territories and military bases worldwide. A full recap of National Night Out will be featured in the “New Spirit” newsletter in January and on the NATW (National Association of Town Watch) website.

“Knowing your neighbors and knowing the Sheriff’s Office are the best first steps toward deterring crime,” says Sheriff Roger Harris. “Please help us make this event a success for all of us.”