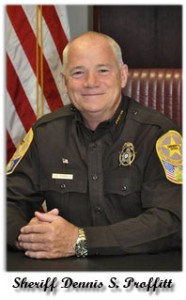 Chesterfield County Sheriff Dennis S. Proffitt has announced his retirement with two years left in his term in a move that allows his handpicked successor — a former county police commander — to be the incumbent if the position is put on the ballot in Chesterfield’s March special election.

“Over the last several years, there’s been some events that have made me realize that I am not immortal, and I’ve served this county for two-thirds of my life,” Proffitt said. “And I’m at the point now that if I’m going to do something (different), I need to do it.”

Proffitt, 63, said he’s in good health, but a serious medical issue involving someone close to him made him rethink his priorities at this stage of his life.

A car and motorcycle enthusiast, Proffitt said he plans to spend more time with that hobby as well as travel and “spend some more time outdoors.”

“If it has a motor in it, I like it,” Proffitt said of his collection of vehicles that include two Harley-Davidson motorcycles, a Shelby Super Snake Mustang, an SR-2 Dodge Charger and an assortment of tractors and four-wheel recreation vehicles.

Proffitt, like his predecessor, has groomed his replacement. Karl Leonard, a retired major in the county police department, will take over when Proffitt officially steps down Feb. 1.

Proffitt brought Leonard on board about four months ago part time, then promoted him to full-time undersheriff, the department’s No. 2 position, in November.

Leonard, like Proffitt in 2007, will have the advantage of incumbency if the position is placed on the ballot for the March 18 special election, which already has been set to elect a new School Board member to fill the unexpired term of Patricia M. Carpenter, who resigned Oct. 25 for health reasons.

Chesterfield’s Circuit Court judges would have to grant authority for the sheriff’s race to be placed on the March ballot.

“I don’t know that it really gives him an advantage or not for that short a period of time,” Proffitt said of any perceived edge that Leonard may receive. “It really gives me an advantage because it makes it so I can go, knowing that I got somebody here capable to take over.”

“I’ve known Karl forever from the police department here, so we’ve talked about (the sheriff’s position) from time to time,” said Proffitt, who spent the majority of his career as a county officer and supervisor. “And then I did ask him if he’d be interested in it.”

Leonard, a longtime U.S. Coast Guard reservist, went on long-term military leave from the police department in 2010 and tendered his resignation in 2012 when he was extended on active duty so the department could fill his position.

He continued to serve at the Pentagon as a captain until July. After being hired by Proffitt, Leonard went back to reserve status, and because of his active-duty time he is exempt from further deployments for three years.

Leonard said he plans to retire from the service before the November 2015 general election to devote all his energies to the Sheriff’s Office. Leonard has 30 years of law enforcement experience and got his start as a deputy under respected Richmond Sheriff Andrew “Andy” Winston.

“(Proffitt) and I do share a relationship that goes back many, many years,” Leonard said. “I actually recruited his son into the Coast Guard back in the ’90s. We have crossed paths not only through the police department but also in the community and as well as the Coast Guard.”

Leonard said the political end of being sheriff will be a new experience, but managing the office should be similar to the leadership roles he has held in the police department and military.

“It’s still managing and leading people and administrating budgets and doing everything I was doing at the police department and at other commands I’ve had in the military,” Leonard said. “So it really is the same job when you’re managing an organization. You still have the same concerns. So that end of it I feel real comfortable with.”