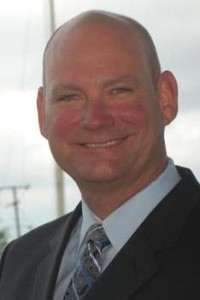 Chesapeake – Lamont Harris was in a rut he wasn’t sure he’d escape.

Harris was found guilty days before Christmas 2011 of a third offense of driving while intoxicated, a felony. He was incarcerated at the Correctional Center.

His father was sick. This wasn’t his first time in jail. He grew angry as he sat and thought about life.

“You can get bitter, thinking no one out there cares,” he said.

The 48-year-old wasn’t religious. He’d been raised Baptist but fell away from church in his 20s, when his mother got cancer.

Looking for a way to keep his life straight when he was released, Harris joined the jail’s Nurture Block, a 12-week Christian-oriented program that runs throughout the year.

In it, about a dozen inmates live together in the jail, studying the Bible and discussing how to use its lessons to better their lives.

“In jail, a day is long,” Harris said. “This gave you structure, helped you focus on what you wanted to do.”

Sheriff Jim O’Sullivan helped start the program about 2-1/2 years ago to reduce recidivism. A 2012 Pew Center national study found that almost half of inmates return to prison within three years of release.

O’Sullivan said he’s heard stories from many former inmates who say they’ve avoided trouble after release because of the program.

Each Nurture Block program has a graduation. Inmates stand before family, friends and visitors and discuss what they’ve learned. Many break down into tears.

O’Sullivan hasn’t missed one ceremony. “As good as Sunday service,” he said.

The sheriff raises money for incidental expenses – such as food at the graduations – so no city, state or federal funds go toward the program. That doesn’t stop some from questioning such efforts.

Alex Luchenitser, associate legal director of Americans United for Separation of Church and State, said church ministries in jails generally are acceptable as long as they don’t use state money and don’t emphasize one religion.

However, “sheriffs shouldn’t be promoting or endorsing in any way,” Luchenitser said.

O’Sullivan bristles at such criticism. He notes that inmates voluntarily enter Nurture Block. He also offers programs for those interested in other religious traditions.

“I’m proud to have programs for individuals that need it most,” he said.

Maurio Anderson is in Nurture Block. He was found guilty in December 2012 of embezzlement. “I was trying to take care of my family and did it the wrong way,” said the 33-year-old father of three.

Anderson said he grew up believing being a man meant taking care of problems without help. Jail Chaplain Britton Joyner, who works with inmates in Nurture Block, taught him to rely on others as well as faith.

Anderson is to be released next month. He’s lined up work driving trucks and plans to worship at New Galilee Baptist Church in Chesapeake.

“As long as I’m rooted in the word and let God lead me, I have nothing to worry about,” he said.

Harris was released from jail in February. He started volunteering, speaking at churches and helping children with homework. For work, he helped with his father’s real estate business.

His father slipped in the bathroom and went into cardiac arrest one night shortly after Harris’ release. Avoiding the lifestyle that got him into trouble in the past, Harris was there.

“Had I not been there, he wouldn’t be here,” Harris said.

He believes his life has purpose. That belief wasn’t there before Nurture Block, he said.