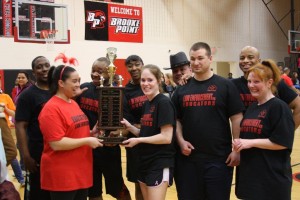 On Friday, March 14, 2014, members of the Stafford County Sheriff’s Office squared off against teachers from the Stafford County Public School System for the Annual D.A.R.E. Fundraising Basketball Game. Twenty-five deputies and command staff personnel from the Sheriff’s Office and 23 educators from the school system participated in the game. Sheriff Charlie Jett coached the law enforcement team, and Adrian Caulfield was the educator’s coach. This annual event is held to raise money for the D.A.R.E Program that is taught to over 2,000 Fifth Graders in the Stafford County Public School System each year. This year the game raised $6,700.00. The gym was packed with enthusiastic students, parents, law enforcement and school system personnel. The monies raised during this event go toward numerous activities that the Sheriff’s Office initiates to promote the objectives of the D.A.R.E. Program.

One of those activities is a D.A.R.E. Day for all Fifth Grade students in Stafford County. D.A.R.E. Day is a culminating activity for students who have completed the 10-week D.A.R.E. Program. On that day, over 60 vendors and exhibitors share with the 2,000 students and hundreds of parents and volunteers numerous activities, resources, and displays that promote healthy alternatives to drugs and violence. Some of the displays include military helicopters, law enforcement and fire & rescue equipment, face painting, demonstrations by members of the Traffic Motorcycle Unit and the K-9 Unit, FBI equipment, VDOT personnel and equipment, the DEA, Virginia Search & Rescue Dog Association and even a team of sky divers who parachute to the D.A.R.E. Day site, just to mention a few. Funds are also set aside to be used for supplies that the D.A.R.E. Officers use in the 17 elementary schools in Stafford County. 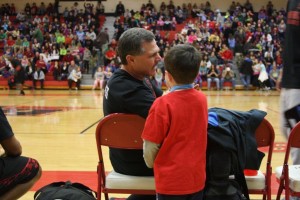 Sheriff Charlie Jett compares basketball strategies with a member of the crowd.

This is the fourth year of this annual D.A.R.E. Fundraising Basketball Game and crowd was the largest ever. The Stafford County Sheriff’s Office Team was victorious this year and look forward to defending their title in next year’s game.