Sheriff Morgan has served his county and his community for over 30 years, first in the U.S. Army and now as sheriff in a major Virginia city commanding a staff of nearly 250 employees. For more than a decade he has been an active player on the state level with legislative and budget issues affecting sheriffs.

“I am honored to serve as President of the Virginia Sheriffs’ Association and look forward to working with our members, the Governor, and the General Assembly to advance our public safety agenda,” said Sheriff Morgan. “Sheriffs are in many cases the first line of defense. We make the safety of all Virginians our top priority, and our deputies and professional staff provide critical emergency services to the communities in which we serve.”

Since taking office, Sheriff Morgan immediately instituted significant policy changes that support his guiding principles: “Justice for all, service to others, and an abiding love for his community.”

John W. Jones, Executive Director of the Virginia Sheriffs’ Association, commented on the significance of Sheriff Morgan’s election given a growing state budget shortfall and an increasingly-difficult climate in which our sheriffs and deputies serve.

“Sheriff Morgan is highly-respected not only with law enforcement officials across the Commonwealth but also among Virginia’s legislative and political leaders,” said Jones. “He will help ensure that the Virginia Sheriffs’ Association remains not only a powerhouse on Capital Square but also the premier public safety advocate in every corner of the Commonwealth.”

Sheriff Morgan served as Second Vice President of the association for the last year. Joining him on the VSA Board of Directors include the following officers:

The Virginia Sheriffs’ Association is the professional trade association representing the interests of law enforcement and sheriffs’ offices in Virginia. It is the primary voice for Virginia sheriffs in the General Assembly on all matters relating to public safety. 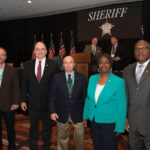 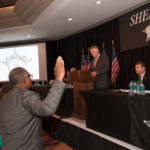 Governor Terry McAuliffe issued the oath of office for the 2016 VSA board of directors.