Engines roared as dozens of bikers took part in a charity ride recently to raise more than $4,000 for the Newport News Sheriff’s Office Foundation and NNSO’s Home Safe-Project Lifesaver program.

The weather was perfect for the Sunday morning ride from Newport News Park and after-ride festivities.

They knew they’d have fun, but they also wanted to help this important program.

“We want to say thanks to the Sheriff’s Office for putting on Project Lifesaver,” said the Combat Vets.

It was the third year for this escorted ride.  Some of the motorcyclists have been involved from the beginning; for others, this was the first year.

Sheriff Gabe Morgan was on hand to personally thank them for their support.

“I want to thank y’all. We do this so that we can provide Project Lifesaver for free to the folks that need it.  For those young kids and folks with dementia, their families have it tough as it is,” he said. “Bikers got big hearts.  You’re always there. You show up, you show up in force and I thank you and the folks that we service thank you.”

Many deputies pitch in to escort riders for the nearly hour-long ride.  Afterwards, riders enjoyed grilled hot dogs & soft drinks while listening to music.  They also participated in raffles and live auctions to raise even more money.

She’s already planning for the October 2017 ride. To get more information, you can e-mail her. 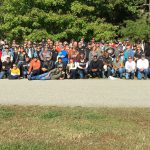 Deputies, bikers and enthusiasts got together for a group photo before the ride. 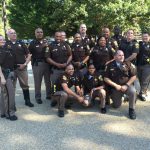 Deputies of the Newport News Sheriff’s Office who helped make the Project Lifesaver ride a success. 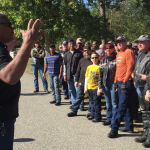 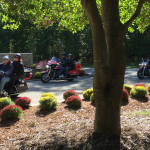