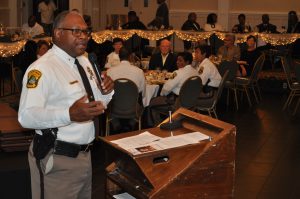 Newport News Sheriff Gabe Morgan talks about the importance of volunteers to his organization.

“Do what you can, with what you have, where you are,” said Theodore Roosevelt. That’s exactly what the dozens of volunteers do for the Newport News Sheriff’s Office every day. Sheriff Gabe Morgan thanked them at his annual Volunteer Appreciation Dinner on October 20. From conducting programs to help men while they’re behind bars and then working with them as they return to the community, the work the volunteers do can’t be overstated. 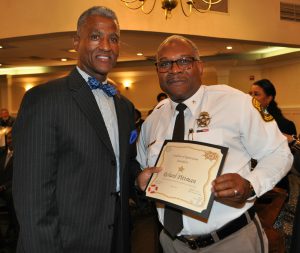 “It takes a special person to volunteer time to serve others, especially when the volunteer has selfless motivation,” says Peggy Howard, NNSO’s executive director of Community Outreach. “When asked what motivates them to volunteer, most will say they feel compassion toward people in need. I can speak from my own experience to say the feeling you get from helping others is priceless and not self-serving. We could not deliver the number of programs inside our jail without the help of our volunteers. I look forward to the appreciation dinner each year and I am thrilled to see our number of volunteers and programs grow.”

The highlight of the night was the announcement of the Sheriff Office’s Volunteer of the Year – Richard Pittman, who teaches the 12-week program called Christians Against Substance Abuse. Its goal is to help participants overcome addiction by helping them strive for a better way of life and produce positive lifestyle changes that will keep them drug free upon release from jail. 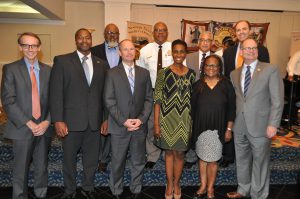 Sheriff Gabe Morgan poses with the dignitaries who show support for NNSO’s volunteers.

Among the dignitaries at the dinner were Rep. Bobby Scott (D-3rd), Del. Monty Mason, (D-93rd) and several judges of the Newport News Courts. Many of NNSO’s command staff were there to show the volunteers how much they’re appreciated.