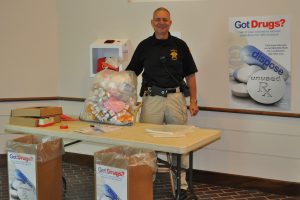 Sheriff Brad Nunnally and Powhatan County deputies recently hosted a successful ‘Drug Take Back Day,” which followed months of drug collection utilizing the office’s CVS/pharmacy Drug Collection Unit/Collection Safe. Powhatan County citizens are doing their part and a wonderful job of taking unwanted prescription drugs out of their houses and out of the reach of those that would experiment with and/or abuse those drugs.

Members of the Rural Substance Abuse Awareness Coalition (RSAAC), of which the Powhatan Sheriff’s Office is an active member, came out to help this fall. During the event, RSAAC members from Goochland-Powhatan Community Services were available to distribute informational booklets and treatment options as well as to discuss community drug facts to those inquiring.

The RSAAC has a vision of a community free from substance abuse and seeks to inspire, equip and educate Goochland and Powhatan citizens on substance abuse. The coalition includes many local community organizations, including schools, churches, justice agencies, youth organizations and government entities. The folks from RSAAC also provided snacks and drinks for those dropping off their unwanted drugs.

Sheriff Nunnally would like to thank the community for its commitment to striving for a drug abuse-free environment and helping to save our natural environment as well. If you have any questions or would like to learn more about Powhatan’s Take Back Program contact Sergeant Brad Luxford at 804-598-5757.