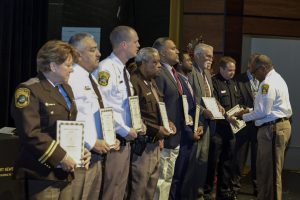 Sheriff Morgan gives certificates and sheriff’s coins to each member of the Booking Transition Team.

Thirteen deputies were promoted during 2016. The new captain, lieutenant and four sergeants were pinned by family members. A new corporal and five master deputies were recognized for their success by Sheriff Morgan.

Other personnel acknowledged during the ceremony included staff from the sheriff’s office, city engineering and the police department who worked long hours to ensure the new state-of-the-art booking area inside the Newport News City Jail would meet the needs of the police officers dropping off suspects and the deputy sheriffs who would process them into the jail.

Sheriff Morgan believes in the ‘One Team, One Fight’ motto. He acknowledged Police Chief Richard Myers, who was in the audience to watch his officers receive the Booking Transition Team award.

The guest speaker was Delegate Mike Mullin, who won the 93rd District House of Delegates seat in the November election and took office on December 10.

Other awards given out were Purple Hearts to two deputies injured in service to the sheriff’s office, life saving medals, sheriff’s medals to mark meritorious service, a citizen service medal given in appreciation of a volunteer’s spirit and commitment to making a difference, a group award for the success of the NNSO’s new catering team and retirement plaques in recognition of employees’ years of service to NNSO.  Sheriff Morgan also thanked the Deputy of the Year –  Deputy Robbin Beale – and the sworn and civilian employees of the quarter. They are selected by their peers for those honors.

The evening ended with Sheriff Morgan and sworn staff taking the oath to reaffirm support for the Constitution of the United States and of Virginia and to “faithfully and impartially discharge and perform all duties incumbent upon” a deputy sheriff for the City of Newport News.

The Newport News Sheriff’s Office looks forward to serving the people of this community in the new year and beyond.