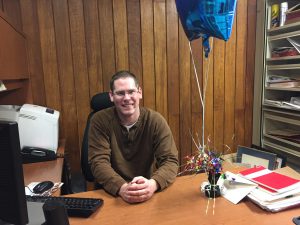 A Newport News Sheriff’s Office sergeant will soon be on the ground in Cuba.

Sgt. Nathan Jones has been a U.S. Coast Guard reservist since 2011 and he’s excited that his first deployment will take him to Guantanamo Bay.

“It’s an interesting time to be there with death of Fidel Castro, the new Cuban president and a new American president coming in,” he said.

Sgt. Jones was activated for one year on January 2. He’ll go for training at Fort Eustis and then will leave for Gitmo in February.

“It’s not just one weekend a month now,” he said with a smile, a nod to recruitment ads that stress reservists as weekend warriors.

As a machinery technician, he’ll maintain equipment like trucks and boats as part of the Port Security Unit. He’ll use his skills to work on engines and other mechanical parts.

He says he’s talked with other deputies and reservists who’ve already served in Cuba, so he feels like he’s ready.

“I was told ‘don’t touch the wild critters’ and ‘when it rains, it’s a downpour, but it doesn’t last long,’” he said.

Sgt. Jones, who has been with the Newport News Sheriff’s Office for six years, is the Accreditation Manager. He appreciates the commitment Sheriff Gabe Morgan has made to accommodate the demands of dual service reservists.

“As an Army veteran, Sheriff Morgan understands the obligation we make to our country,” Jones noted. “I know there will be place for me when I return and that’s reassuring.”

The Newport News Sheriff’s Office is one of 20 agencies just named “Best for Vets: Law Enforcement 2017” by Military Times, a recognition that Sheriff Morgan says reflects his commitment to employing veterans. He says exiting service members are used to working in a structured environment and they understand service to the community.

On Friday, December 30, Sgt. Jones came to work in civilian clothes and cleared out his office to make room for the person who would follow.  A balloon bouquet – sitting on his desk – was one of the last things he took with him before shutting off the light and closing the door.

Jones hopes to become an officer in the Coast Guard and to continue to rise through the ranks at the Sheriff’s Office before retiring.