The members and staff of the Virginia Sheriffs’ Association express our deepest condolences to the Carroll County Sheriff’s Office and the family of Deputy Sheriff Curtis Bartlett, who was killed in a line-of-duty crash late last night.

Please see below for a statement from Carroll County Sheriff J.B. Gardner and the Virginia State Police as well as a WDBJ story about Deputy Bartlett.

The VSA recommends that all sheriffs and deputies shroud their badges in remembrance of Deputy Bartlett through the day of the funeral. Memorial services are pending. 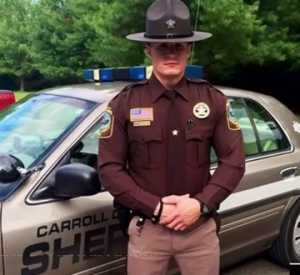 The Carroll County Sheriff has identified the deputy killed in a crash on I-77 late Thursday night as Deputy Curtis Allen Bartlett.

The sheriff’s office says he joined them in 2013. Before coming to Carroll County, he served in the U.S. Army. He’s also a Galax High School graduate.

Bartlett was traveling west on Route 58 with his emergency lights and sirens on when he collided with a tractor-trailer making a left turn onto Route 58 from the I-77 Exit 14 ramp.

State police say Bartlett came to that scene to help a fellow deputy and a trooper with an ongoing pursuit. The two people being chased were caught a short time later.

He’s already being remembered as someone who was a helper. Not only was he a deputy with the Carroll County Sheriff’s Office, he was a personal trainer.

His family is well known in the Galax and Carroll County area. His father is a preacher at a large church in Galax.

Bartlett had deep connections in this area.

Up until last year, he was a school resource officer at county schools and touched many young lives.

He also was a certified K-9 handler and received other teaching certifications from the Federal Law Enforcement Training Centers. He was an accomplished pilot as well.

Bartlett’s friend, Ron Passmore, had this to say, “I started my fitness journey with him on July 1 and I spent five days a week with him up through the Christmas holidays, and I made 100 pounds lost in 8 months. Curtis has had a huge impact on my life. Second to my spouse he was the most influential person in my life.”

The scene of the crash was cleared shortly after the crash and traffic is flowing normally again.

Bartlett was wearing his seat belt.

The tractor-trailer driver, a 59-year-old man from Barren Springs, Virginia, was not injured. 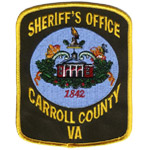 It is with an extremely heavy heart that I must announce the death of Carroll County Sheriff’s Deputy Curtis Allen Bartlett. Deputy Bartlett, 32, did not survive the line-of-duty crash he was involved in late Thursday evening, March 9, 2017.

Curtis joined the Carroll County Sheriff’s Office in June 2013 and was highly respected by his peers for his dedication to duty and passion for public service. He had extensive experience in private security and served his country as an infantry soldier with the U.S. Army from November 2004 to July 2007. Prior to joining the Carroll County Sheriff’s Office, Curtis also served a year as a patrol officer in Albemarle, N.C.

He earned instructor certifications through the Federal Law Enforcement Training Centers (FLETC) for firearms, Taser, and fitness training. Curtis was a certified K9 handler through the US Department of Defense. He was a 2013 graduate of the New River Criminal Justice Training Academy in Dublin, Va., and a graduate of Galax High School.

Having become a CrossFit Level 1 Trainer, Curtis was recognized for his commitment to health, nutrition and fitness, and strived to motivate others within our Sheriff’s Office and other agencies to work towards healthier lifestyles. He was also an accomplished pilot and in 2013 was recognized by the Federal Aviation Administration (FAA) for achieving FAA Airmen Certification.

The Sheriff’s Deputy was traveling west on Route 58 with emergency lights and sirens activated when it collided with a tractor-trailer making a left turn onto Route 58 from the Interstate 77 Exit 14 ramp.

The tractor-trailer had the green light and was only traveling approximately 25 mph. The Deputy’s vehicle was unable to avoid the tractor-trailer and struck the rear tandem. The Sheriff’s Deputy died at the scene.