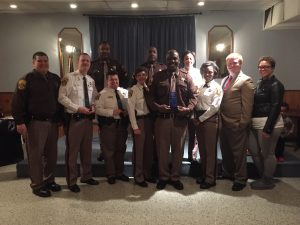 Members of the Newport News Sheriff’s Office (NNSO) were honored last weekend for their service to the community.

NNSO’s ‘Deputy of the Year,’ Cpl. C. Durham, was one of three law enforcement/first responders praised for their work during 2016 by Braxton-Perkins Post #25, American Legion, at its Law and Order ceremony.

When Cpl. Durham isn’t on the job in Court Security, he frequently represents the sheriff’s office at community events. Organizers of the annual Halloween celebration at Denbigh Community Center are quick to say he’s a real treat to work with.

Post #25 officials say it’s their honor each year to honor the brave men and women who protect the people of Newport News.

The American Legion also recognizes each person by engraving their names on plaques that are hung in a place of honor at each agency.

The Legion Riders also gave special recognition to two deputies – Lt. K. Patrick and Lt. R. Summerford – for volunteering to escort them each year as they ride their motorcycles to the Veterans Administration Hospital in Hampton to spend time with veterans living there.