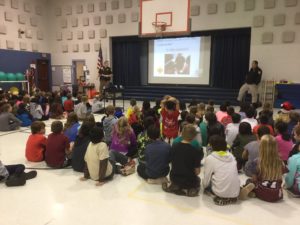 The Prince William County Sheriff’s Office is proud to collaborate with Project ChildSafe and the Virginia Cooperative Extension to implement a new gun safety program.

The gun safety program is an added feature to the “Safe at Home, Safe Alone” program, which has been around for many years and is taught to all fourth grade students in Virginia schools.

Having Deputy Clubb represent the Sheriff’s Office in the schools has been a great honor for him. Although he is involved in many Sheriff’s Office community service projects, being part of the gun safety program is one project he especially enjoys. Deputy Clubb stated, “The thing I enjoy the most about my job is going into the schools and interacting with the children because keeping kids safe is my top priority.”

When an elementary school signs up for the program, Deputy Clubb diligently works towards establishing a suitable day and time to meet with the fourth grade class. On the scheduled date, he provides the students with a 30 to 45-minute PowerPoint presentation with video and discussion. He focuses heavily on making sure the children know what to do if they see a gun. Deputy Clubb stated, “I try to focus on repetitiveness. I want the children to know that if they see a gun, don’t touch it; walk away and tell an adult.” In addition, he educates the students on the differences between a real gun and a toy gun, and on how easily a toy gun can resemble a real gun. He provides the students with an interactive learning environment by having them ask questions so that the students become more engaged in the lesson. Deputy Clubb stated, “My goal is to try to establish a positive relationship with the children. I want them to be able to associate law enforcement as not only being there for bad things, but also for good things.”

At the end of the presentation, Deputy Clubb has the children pledge to not touch or play with guns. He also encourages the students to talk to their parents about what they learned from the program when they get home.

The Sheriff’s Office has received a lot of positive feedback on the program. According to Deputy Clubb, school personnel have been very receptive to the program and greatly appreciate him promoting gun safety in the schools.

Deputy Clubb is very enthusiastic about the program; he is constantly looking for ways to improve it as the demand for it increases. Currently, he has presented to 26 out of the 69 elementary schools in Prince William County, and the cities of Manassas and Manassas Park. He is now receiving requests to present at private schools and other grade levels in the public schools. He works towards honoring all the requests he receives in a timely manner.