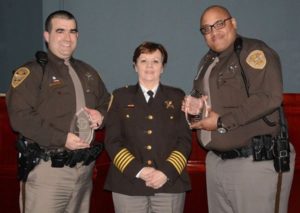 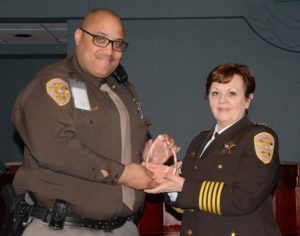 A female inmate that was housed in the mental health unit, continuously displayed deteriorating behavior for several weeks since being booked into the jail. She refused all psychiatric and mental health interventions. The inmate was found incompetent to stand trial and was waiting transfer to Western State Hospital. One evening she became increasingly agitated in her cell and began to throw her belongings. She broke a plastic chair in her room leaving her with pieces of sharp plastic. Department Health Services (DHS) and a variety of security staff spoke with this inmate multiple times in an attempt to retrieve the chair, however, she refused to comply. As staff was preparing to do a cell extraction to remove the sharp objects from her room Deputy Robinson heard about the situation and came to the unit to see if he could assist. Deputy Robinson engaged the inmate, listened to her in an empathetic manner, and showed a great deal of patience. Within a short amount of time he was able to gain a rapport with the inmate who allowed Deputy Robinson to open her cell and retrieve the chair without further incident. Deputy Robinson went out of his way, to assist both staff and the inmate to resolve the situation, without the use of force. Deputy Robinson’s calm, patient, and understanding way of communicating with inmates has shown, in a variety of scenarios throughout the facility making him an ideal candidate for CIT intervention of the year. 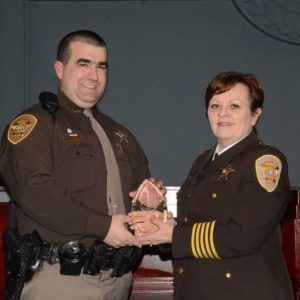 On October 20, 2016, an inmate was out for his recreation time in the 11B Mental Health Unit. This inmate had been told earlier in the day that he would have to move to Mental Health Overflow and the inmate was concerned about the move. When the inmate was told to lock down at the end of his recreation time, the inmate began to move tables and couches blocking the entrance to the unit door. He then began to wrap towels and t-shirts around his face. The housing unit deputy attempted to de-escalate this inmate and have him retreat to his cell, however, the inmate came at him in an aggressive manner resulting in “cap stun “and being deployed. The housing unit deputy called for assistance over the radio and Deputy Pedro was first to respond. As Deputy Pedro entered the unit, he began moving tables out of the way, in order for other staff to be able to gain entrance and assist. Deputy Pedro then began to speak to this inmate, in a calm and quiet voice identifying himself stating,” Inmate “L” it’s Deputy Pedro.” He continued to speak with the inmate in a calm manner, and was able to gain control of the situation, ultimately resulting in the inmate returning to his cell with no force having to be utilized.

At a later time during the same day, this inmate still had to be moved off of the housing unit to create space, resulting in another incident. Two deputies placed handcuffs on the inmate, but once the handcuffs were secured, he attempted to pull his hands back, with the cuffs and leather restraint belt attached. One deputy was able to hold on to the end of the leather belt to maintain control over the situation. Department Health Services (DHS) spoke with the inmate who still would not comply with appropriate use of restraints. Deputy Pedro again responded to the unit to speak with the inmate. He used patience, interpersonal communication skills (IPC) and maintained a calm and supportive demeanor throughout the incident. As a result of his effective communication, this inmate complied with appropriate placement of restraints, and was safely transported to the administrative segregation unit. At one point during the conversation, the inmate specifically stated “If Pedro is taking me downstairs, I will go without an issue.”

This situation is one example of the wonderful skill set that Deputy Pedro has in interacting with all inmates he comes into contact with. While becoming CIT certified has increased his intervention techniques, Deputy Pedro’s success with de-escalation and ongoing rapport building, is largely attributed to his own personality and daily communication techniques. Deputy Pedro is patient and fair, treats inmates with respect and dignity, remains calm during intense situations, and often follows up with inmates after situations to ensure they are ok. He worked on the mental health housing unit for approximately one year and while there was willing to talk with inmates about issues or concerns, he went well above and beyond his job duties, and ran a safe and secure environment for both inmates and staff. Due to the above mentioned scenario, along with his daily use of IPC skills, DHS would like to nominate Deputy Pedro for CIT Deputy of the year.