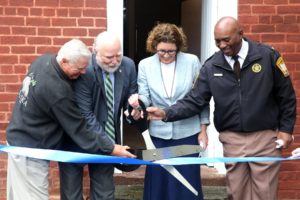 On May 13, 2017, Prince William County Sheriff Glendell Hill attended the ribbon cutting ceremony for the grand opening of the Brentsville Jail.

The reopening of the Brentsville Jail brought many people to the area to be part of this historic event. Along with Sheriff Hill and local historians who attended the event, Brentsville District vice chair of the Board of County Supervisors, Jeanine Lawson, also made an appearance. Sheriff Hill stated, “It is an honor to be part of this historic event. There is so much history within the walls of this jail.”

Built in 1822, it was larger than most jails in Virginia. If you were around during that time, you would have seen the jail filled with debtors, murderers, thieves and even runaway slaves as they awaited their trial.

During the event, Sheriff Hill spoke about jail history. Sheriff Hill stated, “Jails still serve the same purpose for our communities – safety and security is still paramount in jail operations today like they were in the past.

With almost 200 years of history, the Brentsville Jail and Courthouse was once the Prince William County seat during the Civil War. It also served as a college dormitory back in the early 1900s then became a private residence in the 1970s.

Due to the deterioration of the jail over time, it needed major repairs. The project to stabilize and restore the jail began in 2010 and is now open to the public.

The Brentsville Jail is part of the Brentsville Courthouse Historic Centre, which includes five buildings: a one-room schoolhouse, church, farmhouse, courthouse, and the jail.

Sheriff Hill invites anyone who is ever in the Bristow area to stop by and visit this historic building. Not only is there a mile-long nature trail you can explore, you can even have a picnic there too. The Brentsville Jail and Courthouse Historic Centre is located at 12229 Bristow Road, Bristow, VA 20136. For more information on tours and visiting the Brentsville Jail and Courthouse Historic Centre, contact their office at (703) 365-7895.