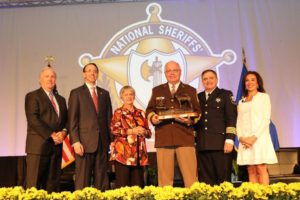 Bedford County Sheriff Mike Brown is the recipient of the 2017 Ferris E. Lucas Sheriff of the Year award from the National Sheriffs’ Association (NSA). He received the honor for his contribution to the law enforcement committee in Reno, NV, at the association’s annual conference. Sheriff Brown accepted the award from Judge Jeanine Pirro on behalf of the men and women of the Bedford County Sheriff’s Office, as they made this honor possible.

“Sheriff Brown embodies what this award was created to recognize,” said NSA Executive Director Jonathan Thompson. “There are no limits or obstacles to keeping his community safe and equipping them with the proper tools to succeed, he is not only a great Sheriff but an even better person.”

Sheriff Brown, now serving in his sixth term, was recently honored by the Virginia Department of Criminal Justice Services for his service of 50 years in the law enforcement community. As described below, he has brought programs to Bedford County, and throughout the country, to keep communities safe… including children and members of law enforcement.

Protect the Protectors
After learning there are over 200,000 law enforcement personnel (Rand Corporation and DOJ survey) that do not have funding to secure ballistic vest protection for themselves, this Sheriff organized donors from across the country and as of this past October his efforts have provided 636 new Level IIIA vests to law enforcement officers across the country.

The Safe Surfin’ Foundation
Founded by the Sheriff, it continues to lead the nation in supplying Internet safety educational materials throughout the country at no cost to the user. Thousands of age-appropriate lesson plans have been supplied to schools, home schools, church groups, scout troops, libraries and concerned parents, to educate our youth beginning in kindergarten through the twelfth grade.

Cyberbullying Awareness
After experiencing two suicides by local youths in Virginia last year and later learning of the suicide of a friend’s son on the West coast, this Sheriff secured funding ($35,000) from private donors, to produce an educational DVD raising the awareness of the dangers of Cyberbullying and how to best recognize the signs that a child is being bullied and how best for parents act in response. This DVD is being offered to SROs throughout the country for training in their respective schools and communities.

Rural Bike Patrol
In response to numerous break-ins in some of the more densely populated areas of the county, Corporal

Jeremy Gardner suggested to the Sheriff that perhaps a Bike Patrol could be useful in better patrolling these subdivision neighborhoods. No county funds were requested nor needed to form this five person patrol unit. Local business owners were happy to donate the funds need for uniforms and equipment. The biggest payoff has been an enormous enhancement of community policing throughout the county and a drop in the break-ins in these neighborhoods and businesses.

The National Sheriffs’ Association recognized Sheriff Mike Brown with the NSA Innovation Award in 2015 for this highly innovative idea and the creating a replicable national model.

COPsync
Another first in Virginia happened in Bedford County under the supervision of Sheriff Brown.  When the Board of Supervisors denied the Sheriff’s request for more School Resource Officers to help protect the vulnerable primary schools, he quickly began searching and researching for a plan ’B’.  Bedford County was first in the state of VA to establish COPsync throughout the school system.  COPsync is real-time, in-car information sharing communications system. Should a threat occur in any of the schools, any teacher or administrator can send a silent alarm which automatically alerts the five closest officers in that area.

Cyber S.W.A.T. Team
In an effort to deliver Internet safety education to as many young people as possible, Sheriff Brown has introduced the Cyber S.W.A.T. (Safety While Accessing Technology) Team in Bedford County high schools.  The idea is to train the older students on how to present Internet safety presentations and have them go into the lower grade schools. Bedford County is the pilot program to work out the kinks then Cyber S.W.A.T. will be replicated across the country beginning with the Los Angeles school system, where a team is already in place for a roll out.

Boys with a Dream
Sheriff Brown has taken ‘community policing’ to a level that has been recognized by the NAACP, NSA, and Congressman Bob Goodlatte, Chairman, House Judiciary Committee. Boys with a Dream evolved from a group of young men playing basketball in the afternoon and decided to start a group to stop violence in the community and work with law enforcement for a solution. The Sheriff recognized the importance of this effort by these young men and immediately began helping organize their organization by convincing a local attorney to handle all of their legal work needed to formally register as an I.R.S. 501 (c) (3) entity.

After hosting this group of African American young men last year for a luncheon at the sheriff’s office, the Sheriff, with the assistance of the Virginia Sheriff’s Association’s was able to take the group to Washington, and they took in a Nationals game and Congressman Goodlatte arranged for a special VIP tour of the Capitol and lunch for the group in the Capitol’s restaurant. This exposure has led to other sheriffs, across the state and country, encouraging youth in their communities to emulate this group, or even start a chapter of Boys with a Dream. They have been invited to the winter conference of NSA in DC this February.

About NSA
The National Sheriffs’ Association (NSA) is one of the largest associations of law enforcement professionals in the United States, representing more than 3,000 elected sheriffs across the nation, and a total membership of more than 20,000. NSA is a non-profit organization dedicated to raising the level of professionalism among sheriffs, their deputies, and others in the field of criminal justice and public safety. Throughout its seventy-five year history, NSA has served as an information clearinghouse for sheriffs, deputies, chiefs of police, other law enforcement professionals, state governments and the federal government.