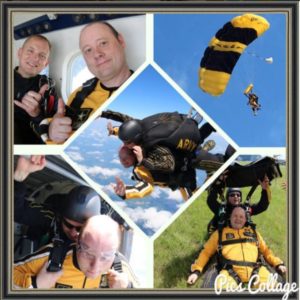 Sgt. C. Agee in the Sheriff’s Office IT department jumped with the U.S. Army’s Golden Knights in June, his first skydive ever.

Attached to his partner, the freefall hit 150 miles an hour as they plunged towards the ground.

“The moment you jump, it’s like the largest worst roller coaster you were ever on. You free fall from 14,000 feet to 3,900 feet. Once the parachute deploys, it’s very peaceful and calm.  By the time you land, you want to do it over again,” Sgt. Agee noted.

The chance to tandem skydive with the pros came about because of the Sheriff’s Office relationship with the U.S. Army PaYS program.  The recruiting initiative guarantees a job interview for cadets and exiting Army
personnel with employers like us, who value Army training, leadership and experience.

Sgt. Agee says he’s not a thrill seeker, but he does like to try unusual things.

Want to watch the jump? It’s on the NNSO YouTube channel.