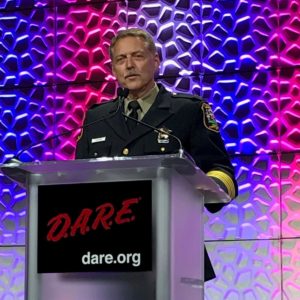 The DEA/D.A.R.E America Law Enforcement Executive award is presented to a senior law enforcement officer who epitomizes an extraordinary commitment to drug prevention and enforcement. The award has been given annually since 2000. Sheriff Chapman joins a small, but elite group of sheriffs and chiefs of police who have been honored by their selection to receive this prestigious award.

“Sheriff Chapman has demonstrated exemplary leadership through the implementation of several educational and drug prevention programs since taking office in 2012, to include the expansion of D.A.R.E to all middle schools within Loudoun County,” stated Francisco Pegueros. “He also delivered programs to the parents throughout the county about the dangers children face on the internet, and on how they can work with their children to identify predators or others who might do them harm.”

Partnering with the Washington, DC division of the DEA and Loudoun County Public Schools, Sheriff Chapman also developed a drug awareness training program that was presented to parents of school-aged children through a series of public forums held at Loudoun County schools. The drug awareness presentations educated parents about the significant increase of prescription pill, synthetic drug, and heroin abuse in the region.

“The guiding synergy behind this effort helped prepare parents to talk to their children about the dangers faced by experimenting with drugs,” stated Special Agent in Charge Karl Colder.

Sheriff Chapman, who was first elected sheriff in 2012, directs operations for the largest Sheriff’s Office in the Commonwealth of Virginia. The Loudoun County Sheriff’s Office (LCSO) employs approximately 800 people (close to 600 sworn deputies) and provides all field operational, court and detention services for a population close to 400,000.

You can read more about Sheriff Chapman’s efforts from his nomination, submitted by the DEA’s Washington Field Office, at sheriff.loudoun.gov/DAREAward.