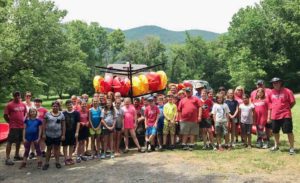 According to Washington County Sheriff Fred Newman, the Virginia Rules Camp was a law-themed summer camp for Washington County rising 6th graders.  Along with a week of summer fun, the camp provided a positive and productive way for the youth participants to spend a week of their summer break.

In addition to learning about Virginia laws concerning bullying, responsibility and technology as it relates to them, campers had the opportunity to participate in activities such as bowling, putt-putt golf, kayaking with Mendota Adventure, archery, fishing, a tour of Bristol Caverns and fun at the Just Jump Trampoline Park.  They were also treated to demonstrations by several law enforcement, fire and EMS teams.

“By educating our youth about Virginia laws and how it affects them, we believe the kids will be able to develop skills to recognize the consequences of their life choices and actions,” stated Sheriff Fred Newman.

Attendance averaged 36 campers each day.  The kids were tested before the camp regarding their knowledge of Virginia laws and again at the end of the camp.  During the pretest, campers scored an average of 73%.  After the camp, the test scores were boosted to 96%!  This indicates that while the kids were enjoying their week, they were also listening to the instructors and learning how to be more responsible in their actions.

“The kids who participated and their parents have given us feedback indicating the camp was a huge success, and have recommended that this camp be an annual event for our rising 6th graders,” stated Sheriff Newman.