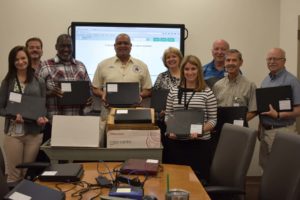 riff C.T. Woody recently accepted 45 computers donated by Bethel, Computers for Education (BCFE), a non-profit group in partnership with Bethel United Methodist Church. 30 computers will be used for residents of the Richmond City Justice Center who are enrolled in the Sheriff’s Recovering from Everyday Addictive Lifestyles (REAL) Program. The remaining 15 computers will be used for REAL Program Alumni, individuals who went through the REAL Program while they were incarcerated who have since been released, and need access to computer technology.

“While we have a technology lab with ten computers in it now, adding an additional 30 computers will enable us to serve more residents who are looking to better their lives upon release,” said Sheriff Woody. “Not only will they be able to take advantage of the job preparation and resume building software, they will also have access to Kahn Academy, a software that has thousands of educational tutorials on subjects like math, history, and computer science.”

Sheriff Woody added, “Those of us who work in law enforcement know that if a resident has a job to go to once they leave a correctional facility, they are less likely to recidivate and return to the streets. 95% of people who are in jail in this country are going to be released back into the community; Computers for Education is helping us return better citizens to our communities, and not better criminals.”

Bethel, Computers for Education, was founded by Denny Baumann nearly two decades ago when he discovered a need for computers in a mission school located in Mississippi. Since then, BCE has answered the needs for computers in churches, schools, hospitals and disadvantaged communities not just in the United States, but all over the world. Because of this, the computers can be programmed in English, French, and Spanish.

“BCFE is very pleased to be making this donation to the REAL program,” said Mr. Baumann. “We know that computers play an important part in what we call a ‘quality education.’ Our goal is to help the RCSO and DOC improve their respective educational programs and thereby reduce recidivism in the state of Virginia.”

The computers donated to the REAL Program will also come equipped with Kahn Academy, an educational software tool with nearly 8,000 learning modules containing everything from math and English, to the humanities and sciences for grade levels kindergarten to 12th grade, as well as programs for GED prep and college admissions.