How to save lives with DNA testing

Virginia Sheriffs' Association > News > How to save lives with DNA testing 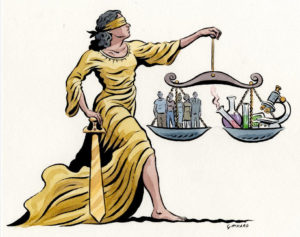 Three years ago in Albemarle County, Virginia, Jesse Matthew Jr. abducted and murdered promising 18-year-old University of Virginia student Hannah Graham. Her skeletal remains were found more than a month later in the woods of southern Albemarle. Her grief-stricken father had this to say of his daughter: “She was bright. She was witty. She was beautiful. And she made people happy.”

In 2009, Mr. Matthew had murdered Morgan Harrington, another young student, and four years before that had attacked and sexually assaulted a woman in Fairfax, Va., leaving DNA beneath her fingernails, which would lead to his conviction after the two murders. But Jesse Matthew had been convicted of misdemeanor criminal trespass in 2010. Had his DNA been recorded at the time, it would have linked him to the 2005 Fairfax attack, and Hannah Graham would be alive today.

The criminal-justice system, legislatures, and, indirectly, all of us have failed these and countless other victims of brutal abductions, rapes, torture, and murder. In Virginia as in most states, no procedure is in place to record DNA following certain serious misdemeanors. Because of the efforts of Sheriff J.E. “Chip” Harding, nine Class 1 misdemeanors have been added to the previous five eligible for DNA collection, but scores of Class 1 offenses are exempt. He proposes to include them.

Last year in the U.S., according to preliminary FBI figures, more than 15,000 people were murdered and 90,000 forcibly raped. Whereas relatively few of those who commit misdemeanors go on to more consequential crimes, most of those who do commit serious crimes have a record of prior misdemeanors. In New York state the average first-time felon has three. Major felons tend to be recidivists. As illustrated by the cases outlined above, many thousands of lives could be protected or saved by solving one crime before a perpetrator has the opportunity to commit others. Police and prosecutors would be freed to work other cases, and, not least, false convictions would decrease and exonerations of the falsely convicted rise.

With the Blue Ridge as the backdrop, the Albemarle County Sheriff’s Office is hardly something out of “My Cousin Vinny” or “In the Heat of the Night.” True, there are the “No Weapons Beyond This Point” signs, the bulletproof glass, the M4 locker, and 70 sworn officers passing in and out like bees in a hive. But they are a highly qualified, integrated, and ethical force, which, with its unusual reserve division, claims interpreters of half a dozen languages, fixed-wing and helicopter pilots, and military, intelligence, medical, and legal professionals.

At the head is Sheriff Harding, one of the International Chiefs of Police “Top Ten Cops” in America, an FBI Academy graduate with more than 40 years on the job. In his office, he analyzes spreadsheets with thousands of data points relevant to the correlation of major felonies with prior misdemeanors. He has been at it for decades, working with the Innocence Project, testifying before Congress and the state Legislature.

Why such devotion? “If one Nathan Washington had submitted his DNA when convicted of a misdemeanor in 1998,” he answers, “he never would have become the notorious Charlottesville serial rapist, who raped at least seven women. His DNA would have returned a ‘hit’ from a 1997 rape in another town. I wouldn’t have had to enter the room where one of his victims’ blood was spattered over three walls as he raped and beat her for hours. The six other women would have been spared. Isn’t that enough for devotion?”

Sheriff Harding faces two main impediments: that to be maximally effective, the steps he recommends must be implemented across thousands of jurisdictions, most of which have yet to be introduced to the idea; and, in the era of big data, civil liberties objections arise, despite the Supreme Court’s ruling in Maryland v. King (2013) affirming police authority to sample DNA after arrests for a broad range of criminal offenses.

The first obstacle requires a good and well-publicized argument. As for the second, requiring DNA from everyone would be egregiously invasive, but what is proposed instead is that a person exits the realm of innocence when (with exceptions such as driving under the influence) he is convicted of a crime subject to arrest and incarceration. Biometric and fingerprint data would be taken as a matter of course, and a cheek swab is less demanding than having fingerprints done or tattoos photographed.

The sheriff’s carefully sourced arguments have allies both likely and unlikely. Across the street, in the court complex once frequented by Jefferson, Madison, and Monroe, is the office of Albemarle County Commonwealth’s Attorney Robert Tracci, a former federal deputy assistant attorney general and chief legislative counsel and parliamentarian to the House Judiciary Committee. Having assisted passage of the 2004 Justice for All Act and other major federal criminal justice reforms, he has lent the weight of his expertise and experience to this effort. “DNA technology,” he says, “advances justice by solving crime and freeing the innocent. With adequate safeguards, it is neither partisan nor biased, but essential.”

Strange bedfellows are Govs. Andrew Cuomo of New York and Scott Walker of Wisconsin, who, at opposite ends of the political spectrum, are on board nonetheless, having subjected all serious misdemeanors in their states to DNA collection. “Blue” New York is exemplary in making the connection between misdemeanors and major crime, despite its similarity in spirit to James Q. Wilson’s “broken windows” policing, which liberals hardly embrace, even though—or perhaps because—it works.

Sheriff Harding’s and Mr. Tracci’s advocacy is neither partisan nor overbearing. It is completely race-neutral. It does not threaten civil liberties. Even as it would make use of the federal DNA clearing center to coordinate state “hits,” their initiative arises, consonant with the finest traditions of federalism, from the people and the states, rather than from the top.

Their arguments are detailed and reflective of their training, experience, and judicious consideration. Their passion is informed by the prospect that so much violence, suffering, and death can be avoided if their policy is embraced. Hannah Graham would still be alive today, and her family not perpetually aggrieved. Multiply that by the thousands and tens of thousands.

Mr. Helprin, a senior fellow of the Claremont Institute, is the author of “Winter’s Tale,” “A Soldier of the Great War” and the forthcoming novel “Paris in the Present Tense.”

Appeared in the August 2, 2017 print edition of The Wall Street Journal