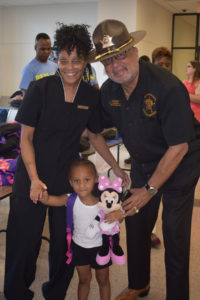 Sheriff Woody hosted a school supply drive for children of residents incarcerated at the Richmond City Justice Center. Each child received a back pack filled with notebooks, pens, pencils, crayons, and other school supplies that were donated by Richmond City Sheriff’s Office staff, as well as other members and businesses in an effort to ensure as many children as possible are fully prepared to greet the new school year with everything they need to be successful. Radio station 106.5 The Beat also partnered with the Richmond City Sheriff’s Office in the supply drive, and was on site today to provide music and also give away backpacks and supplies.

“The last thing I want for any of these children is to follow in their parents footsteps by ending up incarcerated,” said Sheriff Woody. “Staying in school and getting the best education is not only the number one thing they should be concerned with right now, but it’s also the best way to ensure they don’t end up in the Richmond City Justice Center as a resident. I have always said that I have both a legal duty and a moral duty. My legal duty is to manage a safe and secure correctional facility, and to ensure the security of our courts. My moral duty is to be a leader and a mentor for the next generation, and to help them reach their full potential, and any way I can help in doing that, I am going to do.”

106.5 The Beat, a consistent partner of Sheriff Woody’s with several community projects, was also on hand to give away 25 stuffed back packs to kids for the supply drive. “We feel that is important that students have all the tools necessary to be successful in and out of the classrooms during the upcoming school year,” said D.J. Mike Street. “With the help of partners like BIC, we are proud to be able to facilitate and aid in student successes.”

Over 70 children local to the area took part in the School Supply Drive. This is the second year Sheriff Woody has hosted an event in the Richmond City Justice Center intended to prepare children for the coming school year.