New look in 2018 for the York-Poquoson Sheriff’s Office 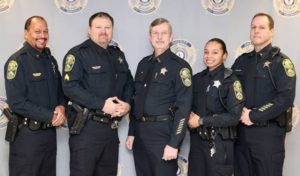 Sheriff J.D. “Danny” Diggs recently announced a change to the York-Poquoson Sheriff’s Office’s uniform. Beginning on January 7, 2018, all York-Poquoson deputies will begin wearing navy blue uniform shirts. The change in uniform will be a sharp contrast to the silver-tan shirts previously worn.

Sheriff Diggs stated, “I want all citizens and business owners to be informed of the change to prevent any confusion once we go to the new uniform shirt. County citizens are so familiar with the current uniform. I don’t want anyone confused about who is showing up when a call for assistance is requested.”

The uniform transition has been in process for several months. The Sheriff’s office last changed uniforms in 2006 when it went from dark brown shirts and tan pants to silver tan shirts and dark blue pants. Since they already have dark blue pants, jackets and other accessories, the transition is easier this time since only the shirts are changing. The shoulder patch and badge will remain the same.

This initiative came from the deputies working in the Uniform Patrol Division, who felt that the navy blue shirt would be a better choice, as it maintains a cleaner and more professional look while providing them with an added layer of safety during nighttime operations. The first phase consisted of research regarding the costs and availability associated with the existing uniform shirt and the navy blue shirts. Over the past several years, the sheriff’s office has been experiencing more and more difficulty in obtaining silver-tan shirts often having to wait in excess of months to receive an order. The navy blue color is more readily available, and the new uniform also is less expensive (approximately $7 per shirt), since they no longer have to add epaulets, a special-order item. There are no additional costs to the taxpayers, because the funds that are being utilized are part of the York-Poquoson Sheriff’s Office’s existing uniform budget.