NEWPORT NEWS — There was an impromptu meeting in the Sheriff’s Conference Room on February 26.  Many leadership personnel sat around the table. Sheriff Gabe Morgan arrived and spoke to the group.  He then called on Cpl. Monica Jones and announced her selection as Deputy of the Year 2017. After the applause died down, Sheriff Morgan read her certificate of award and presented her with other tokens of appreciation for a job well done. Cpl. Jones smiled as Sheriff Morgan congratulated her and said “thank you” to the assembled group.

Cpl. Jones has been with the NNSO since December 2009. She completed her certification for Basic Law Enforcement in 2013, made Master Deputy in January 2015 and was promoted to Corporal in January 2017. She has worked in the jail, Transportation and Court Security. Just two months ago, she crossed the street from the Courthouse to an office in the Justice Building as head of Accreditation.

Before her Deputy of the Year honor, Cpl. Jones’s peers chose her as Deputy of the 1st Quarter of 2017.  In the nomination letter, co-workers described her as “professional, good natured and kindhearted,” to say nothing about her knowledge of the intricacies of the job and her willingness to teach others.  Her lieutenant at Courts wrote, “Her attitude towards the people she works with  – both fellow professionals and those in custody – creates a happy atmosphere that … helps diminish any problems that may arise from negativity.”

In her new job, Cpl. Jones is tackling Accreditation with her usual diligence and resolve to perform at a high level.  Accreditation’s importance can’t be overstated.  Accreditation means there’s accountability to the public and government officials that NNSO personnel are meeting and exceeding standards; thereby reinforcing confidence in the agency.

Cpl. Jones has a Bachelor’s Degree in Business Administration with a minor in Management from Strayer University.  She also holds an Associate Degree in Computer Information Systems from Thomas Nelson Community College.

True to Sheriff Morgan’s credo of “committed to making a difference,” Cpl. Jones is an active member of Restoration Family Life Center in Newport News, where she participates in the outreach and usher ministries.  She has two sons and four grandchildren.

The Sheriff’s Office is proud to have Cpl. Monica Jones represent the agency as its Deputy of the Year.  She will be recognized on March 10 by Braxton-Perkins American Legion Post #25 during its annual Law and Order Night and at the NNSO’s Promotion and Awards Ceremony in December. 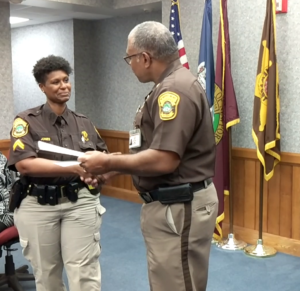