Colonel David R. Hines accepted the certificate on behalf of the men and women of the Sheriff’s Office, stating that “without the strong partnerships we have worked so hard to establish within our community, this reaccreditation would not be possible to achieve.”

To achieve reaccreditation, the Sheriff’s Office must undergo a rigorous on-site inspection every four years by multiple specially trained, independent assessors, who examine all areas of the agency to ensure compliance with all applicable professional standards set forth by the commission. This requires the agency to maintain its accreditation files on an ongoing basis and provide annual proofs of compliance. 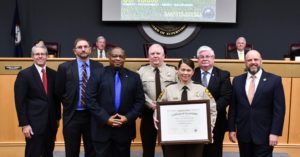