The Red Cross wanted to collect 25 units of blood during the June 15th drive.  It ended with 27 units donated.

Sheriff Gabe Morgan asked personnel to support the effort, which was part of the annual Mayor’s Cup contest. Law enforcement agencies holding blood drives during June were also part of the Battle of the Badges competition.

James Marino with the American Red Cross said he was particularly impressed with the number of first-time donors.

“17!!! This is one of the most exciting numbers in this whole Mayor’s Cup/Battle of the Badges drive! First-time donor numbers have been declining across the nation for years, and you got a whole bunch!,” he said.

Everyone who came to donate, even if they weren’t able to give blood, received a Battle of the Badges T-Shirt.

One deputy, giving blood for the first time, said he had two reasons for donating: to help those in need and to get that T-shirt. 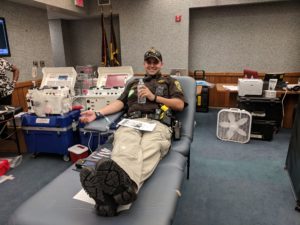