Chesterfield County, VA – On July 19, 2018: Chesterfield County Deputy Sheriff’s monitoring security cameras this morning witnessed Crystal Corbett, age 38 of the 300 block of Country Club Road in Crewe, VA, sitting on a curb of the Chesterfield Courthouse parking lot apparently intravenously injecting something into her right arm and then discarding a syringe in a nearby sewer.  Within a few minutes other deputies responding detained Corbett and retrieved the syringe from the sewer which appeared to have heroin residue.  Deputies also discovered other illegal drugs in her possession.

She is being held without bond on those charges with a court appearance tomorrow at 11 a.m. (The cases she was to appear on today were continued until September 26, 2018 at 8:30 a.m.) 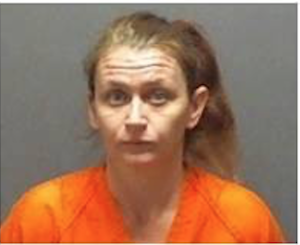