On Sunday, August 19th, Deputy Tim Burton and K9 Rex visited Girl Scout Cadette Troup 98 for a demonstration and talk. Deputy Burton said, “Rex and I had a great time, the girl scout troop was so interested in what we were doing and they asked great questions. We really enjoyed our time spent with them.” Thanks to leaders Angie Shirley and Crystal Hicks for inviting us. 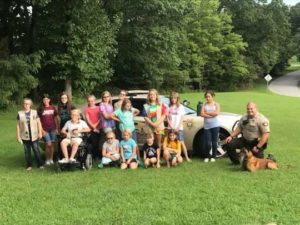 Picture shows Deputy Tim Burton, K9 Rex and the Girl Scouts along with their leaders.

Saturday, August 18th was Community Day at the Glade Hill Fire Department. Many public safety items were on display, and the Sheriff’s Office provided a golf cart with the DUI impairment goggles. The goggles simulate what impaired driving looks and feels like. Everyone had a great time; thanks to our great COPS program team for helping out at this event. Also, thanks to the Glade Hill Fire Department of inviting FCSO. 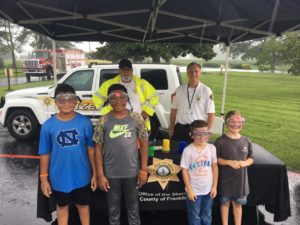 Picture shows local children with the impairment goggles on with our COPS program people.

Per State of Virginia Department of Corrections regulations, each jail in the state must have a full audit every 3 years. The Franklin County Sheriff’s Office 3-year jail audit occurred this week. Wayne Solomon, DCJS Local Facilities Manager, and David L Baisey, DCJS Certification Analyst, inspected our jail along with hundreds of jail documents and rated us at 100%. Our top-notch jail staff completed over 120 standards, in addition to all the inspection details involved in an audit of this magnitude.

Major Mike Bowman stated, “A 100% rating is a testament to our entire jail staff. We strive for excellence, and it is evident in this audit’s results. Thanks to all of the Franklin County Sheriff’s Office Corrections Division for a job well done.”

Ferrum Elementary School held “Super Heroes Day” recently and invited local 1st responders to help them celebrate. .Thanks to Ferrum Elementary and Principal Jennifer Talley for inviting us to attend.

SHERIFF’S OFFICE REPRESENTED AT WARREN STREET FESTIVAL
On Friday, August 17th, the 19th Annual Warren Street Festival was held in Rocky Mount and the Franklin County Sheriff’s Office participated in the event. The two-day festival celebrates the legacy of Steve Warren and the rich African-American history of Franklin County. Deputy Zachery Adkins represented FCSO operating our information tent. Thanks to the organizers for having us be a part. 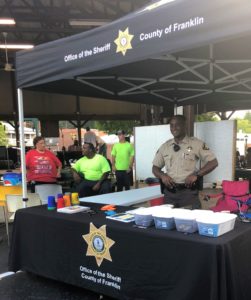