Franklin County Sheriff’s Office – Out and About

On Thursday, October 4,2018,  Major Mike Bowman of the Franklin County Sheriff’s Office spoke at the Rocky Mount Rotary Club. Bowman was present and worked the Virginia Tech Shooting back in April  2007 during his tenure with the Virginia State Police. He spoke on some of the details related to that day and what law enforcement has learned since that time. Bowman told the club the lessons from that event have shaped how we teach and train today for active shooter events.

After an extensive investigations process, FCSO made arrests recently on a rash of break-ins around the Hardy area that occurred in August of this year. Arrested were; David Morgan Ayers and Michael Lawrence Walters. Great work by our officers in their hard work and persistence. See article.

On September 27, 2018,  the Sheriff’s office had an opportunity to stop by and speak with the Pre – K Class at Trinity Ecumenical Parish. Deputy Jesse Ramsey said, “We talked about many topics relating to child safety and on the duties of a law enforcement officer. We had a great visit.” Thanks to the staff of Trinity Pre – K for putting this event together. 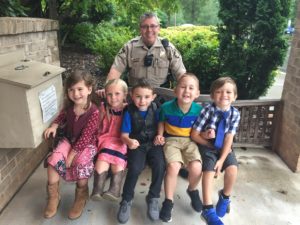 The Franklin County Sheriff’s Office winds down on Smith Mountain Lake for 2018. During this year, the FCSO unit logged hundreds of miles and man hours, while assisting boaters on SML. From good weather days to bad, searching for lost individuals, helping standing or off course boaters, our boat patrol officers had a busy year. 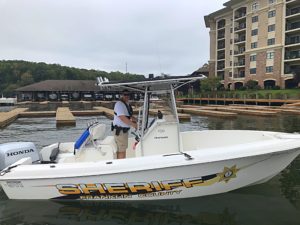 Pictured in Sgt. J. P. Nolen. Thanks to Sgt. Greg Talley for taking the picture.