The Virginia Sheriffs’ Association Pauses, Gives Respect to the Victims of September 11, 2001 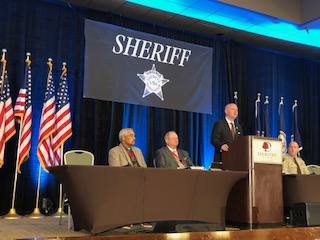 ~Recognizing our first responders in Virginia for their courage and dedication to protect and aid the public while remembering all those who responded to and perished during the events of September 11, 2001~

VSA President Sheriff Steve Dempsey (King George County) opened the session with comments to commemorate that dreadful day. A moment of silence and invocation was led by Sheriff Ashland Fortune (Louisa County), recognizing the sacrifices of first responders across the Commonwealth. “I am honored to participate in this important moment on behalf of all first responders” said Sheriff Dempsey.

Del. Michael P. Mullin, 93 House District (D), introduced HJ 646 during the 2019 session of the Virginia General Assembly as a way for the General Assembly to recognize September 11, 2019 and each succeeding year on September 11 as “First Responders Day.” Delegate Mullin presented the resolution in the presence of more than 400 attendees of the VSA annual conference in Williamsburg. Del. Mullin said, “I am humbled by the service and sacrifice of all our first responders, and I’m deeply honored to be here with Virginia’s Sheriff’s on the first official ‘First Responders Day’, as I present HJ 646.”

The members of the Virginia Sheriffs’ Association express our deep gratitude and appreciation to Delegate Mullin and the Virginia General Assembly for this recognition.