Get to Know Your Sheriffs – Sheriff Antionette Irving – City of Richmond

If you’ve missed our previous introductions this summer and fall of our Virginia Sheriffs, links to these posts may be found at the bottom of this page. We hope you will come to know and appreciate these men and women as much as we do! Our Sheriff introductions may also be found on our Facebook page, along with other interesting news items about our member sheriffs! 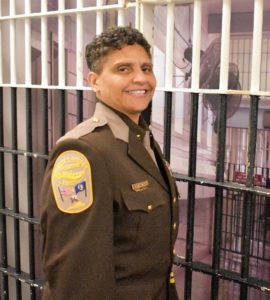 10. If you could have any superpower, what would it be and why?
I would be able to cure all illnesses & diseases; eliminate poverty and homelessness; create jobs for all and improve the educational system.

11. If you could visit any place in the world, where would it be?
Hawaii

12. What are you most proud of?
The journey that led me to this point in my life of who I am today (professionally, educationally, athletically and spiritually).

14. What character do you most admire in others?
There are too many to pick just one; I admire transparency, confidence, accountability, determination, commitment, decision making ability, empowerment, good work ethics and creativity.

On January 1, 2018, Dr. Antionette V. Irving became Sheriff of the City of Richmond facilitating one of the largest Sheriff’s Offices in the Commonwealth, to include over 450 sworn and civilian staff members.

Sheriff Irving is a proud native of the City of Richmond and product of Richmond Public Schools where she learned the values of respect and discipline that have served her throughout her career. Growing up a child of substance abuse and domestic violence in the Church Hill of Richmond to include the city’s Creighton Court public housing project, she viewed life with no obstacles or boundaries. A graduate of Armstrong-Kennedy High School, her strong work ethics drove her to become a basketball standout, eventually being named to both the Armstrong Kennedy High School Athletic Hall of Fame and the Shaw University Athletic Hall of Fame.

Sheriff Irving enjoyed a 26+ year career in the Henrico Sheriff’s Office and was the first woman to be promoted to the rank of Major in either the Henrico Sheriff’s Office or Police Department. Her leadership and vision encompasses organizational management, fiscal administration, human resources development, conflict and dispute resolution, mediation and community relations. Sheriff Irving’s focus is on establishing a culture of excellence at the Sheriff’s Office by focusing on the professional development of the staff, establishing strong community partnerships, and equipping residents of the Richmond City Justice Center with the resources they need to prepare themselves for successful reentry into society.

Sheriff Irving is a committed mentor, civic leader, and philanthropist in the City of Richmond.  She volunteers within the community, as well as, with the Saint Paul’s Baptist Church and the Salvation Army Boys and Girls Club. A child of domestic violence and substance abuse, Sheriff Irving is a strong proponent of education and youth development. She strives to encourage young people to develop strong values, self-esteem, self-reliance, character, and discipline through the AVI Foundation, which she founded.