Get to Know Your Sheriffs – Sheriff B.J. Roberts – City of Hampton

For the month of January, we are excited to introduce to you City of Hampton Sheriff B.J. Roberts. As of the start of 2020, Sheriff B.J. Roberts is now the most senior sheriff in Virginia, having served since November 1992.  We asked him to give us insight into his career as well as what inspires him outside of law enforcement. When asked what he is most proud of, Sheriff Roberts replied, “I am most proud of becoming the First African American to serve as President of the National Sheriffs’ Association and the first elected Sheriff and Constitutional Officer for the City of Hampton.” 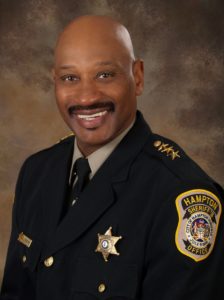 We are currently working on building a state of the art jail facility and extending our inmate programs.

This is a difficult question because I like every aspect of my job. In this business, you come to appreciate all that it takes to operate a jail. I like attending the various sheriffs’ conferences and learning new and innovative ways to better operate our facilities.

I enjoy open discussions with my deputies; I want to hear their perspective and ideas for this agency. I also love going out into the community and interacting with the citizens and participating in community outreach programs.

There are many people in my life that have influenced and helped me throughout my career. But I will narrow it to three mentors/role models that have helped mold me into the person that I am today.

The first is my father. He instilled in me at a very early age work ethic and discipline. Second, Mr. Wyatt, my first boss at Hampton University. He was very supportive and encouraged me to continue my education. It was his influence that helped prepare me for this job. Lastly, Mr. Clay Hester, he assisted in showing me how to get through the maze of being a sheriff, and understanding everything from Finance to Corrections to the Compensation Board. He taught me about commitment to the community and the value of the Virginia Sheriffs’ Association.

I enjoy fishing and golfing.

My favorite songs include “Baby Workout” by Jackie Wilson, “Send For Me” by Will Downing and “There’s No Me Without You” by Toni Braxton.

As a youth, I often found myself breaking up fights or mediating a volatile situation and I became known as “the Police.” I guess I’ve always liked helping people and making things right.

I was the Director of Public Safety for Hampton University.

It would be the power to heal. I would rid the world of mental illness, sickness and disease.

I would love to visit Africa.

I am most proud of becoming the First African American to serve as President of the National Sheriffs’ Association and the first elected Sheriff and Constitutional Officer for the City of Hampton.

Sheriff Roberts was sworn in as the 69th president of the National Sheriff’s Association (NSA) in June, 2010. Sheriff Roberts’ swearing in as president of the NSA marks the first African-American in the 70 year history of the organization to preside over the 18,990 members. The NSA membership boasts over 3,000 Sheriffs in the United States.

Sheriff Roberts began his law enforcement career as a patrolman on the Newport News Police Force.  He then began his 19 year career with Hampton University’s Campus Police, where he moved through the ranks to become the Director of Police and Public Safety. In 1992, Sheriff Roberts was elected as Sheriff for the City of Hampton.

Sheriff Roberts has served and is currently on numerous boards.

Sheriff Roberts is a longtime member of Queen Street Baptist Church in Hampton and has spiritual roots that are deeply embedded from his childhood. He has received numerous honors and awards including: the City of Hampton’s Citizen of the Year, Role Model of the Year from the 100 Black Men Organization, Public Service Award of the Year from CHUMS, Inc., and has been elected to the Police Hall of Fame.