Get to Know Your Sheriffs – Sheriff Connie Compton – Rapphahannock County

When asked what advice she would give to other women pursuing careers in criminal justice (or any career, for that matter), Sheriff Compton replied, “Never give up and never let anyone tell you that you can’t do something. As long as you give your best, you will never fail.” 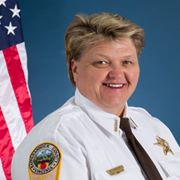 Connie S. Compton was born and raised in Rappahannock County. Connie attended and graduated from Rappahannock County High School in 1985. In high school, Compton excelled in sports. To this day, she continues many of the friendships she created through sports programs. After graduating, Compton became a Dispatcher Matron in 1988. After serving the role as Dispatcher Matron, she was promoted to patrol in 1990. This promotion made her the first ever female patrol deputy in the history of Rappahannock County. Compton was promoted to the rank of Sergeant in 2001 and also became the first ever female investigator in the county’s history. Promoted again in 2003 to the rank of Lieutenant, Compton still remained the only female investigator. Compton became the first female Sheriff of Rappahannock County in 2008. She currently uses her position as Sheriff to mentor as many young children as possible. Her love for sports has only grown over the years and she proudly serves as a coach at the local high school.