Newport News Sheriff Gabe Morgan is pleased to announce the promotion of five men and women to their new leadership roles.

Capt J. Vergakis is now Major Vergakis. With her appointment, she becomes Operations Bureau Chief (following the recent retirement of Major Rob Coleman). She most recently held the position of Jail Administrator. Vergakis has been with the NNSO since February 1988.

Lt. R. Daniels leaves Professional Standards as a captain and moves into the role of Jail Administrator, which was previously held by now Major Vergakis. Daniels has been with the NNSO since August 1993.

Lt. C. Vincent will continue in the Services Bureau. She joined us in November 2005.

Sgt. J. James came to the NNSO in February 2013 and is assigned to Operations Bureau.

We celebrate their hard work and dedication to the mission Newport News Sheriff’s Office and the community.  The promotions took effect April 19. 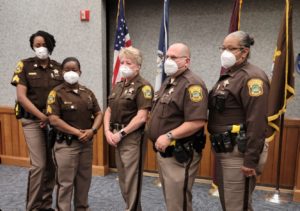