As we continue the 2022 series of “Get to Know Your Sheriff,” we are pleased to introduce to you Bristol Virginia Sheriff’s Office’s very own Tyrone Foster. Prior to becoming sheriff, Foster served on the Virginia School Board since 2008; he now wears a new hat after winning the race for sheriff in November of 2021.

If you’ve missed previous introductions of our Virginia Sheriffs, links to these posts may be found at the bottom of this page. We hope you will come to know and appreciate these individuals as much as we do!

Get to Know Your Sheriff – Sheriff Tyrone Foster, Bristol, Virginia 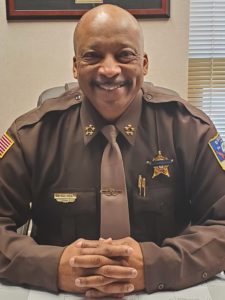 What new initiatives do you plan to focus on?

As discussed in my campaign, my aim to form a partnership with the city’s Police Chief, Fire Chief, Commonwealth Attorney and School Superintendent to tackle community awareness. I want to expand the DARE Program to middle and high school. I also want to partner with our Community Service Board and other local community agencies to help tackle drug abuse and mental health in order to find ways to rehabilitate and reduce recidivism.

As a lifelong resident of Bristol I would like to make this Sheriff’s Office the best that it has ever been. I am proud of my city and the efforts of this office, and I just want to put my mark on it and leave it in a little better shape or position than when I took over.

To what do you look forward most about your job?

I look forward to serving. As I stated I am a lifelong resident of Bristol and to be able to fulfill the dream of my life which was law enforcement. After serving as an Officer in enforcement and a Detective in investigations, this is the feather in my cap to complete the circle now in corrections, court house and courtroom security as well as civil process. I have always wanted to serve my community.

Who have been mentors and/or role models in your life/career?

Jesus Christ is my role model. Besides my Lord and Savior, I have to say my biggest mentor and role model was my father Samuel C. Foster. My dad “Sam” was a hardworking man that gave me the push to always think that there is nothing you can’t do. He pushed myself and my siblings to be the best that we can be but also to be humble. He would always say “Never forget who you are and where you came from but also you have to know who you are in order to know where you are going.” He is one of the reasons I have adopted my slogan to “Inspire” and “To Be The Difference.” He definitely is an inspiration to me. Also I credit his brother, my uncle John Foster, as well as several teachers and coaches that have played a part in my success.

What energizes and inspires you to continue to dedicate yourself to your work, protecting and serving your community?

Knowing that this is my home and my lifeline. I always want to give back to the community that has given me what I have. I enjoy the people that I live around and connect with.  Falling back on my faith I know that GOD has anointed me to be a guardian of peace. This motivates me more than anything.

What do you enjoy doing in your time away from work?

I love spending time with my children and grandchildren as often as I can. Most of them still live in the area so I love watching them in their extracurricular events. I have always been involved in my community with different things. I have been a board member on the professional baseball team in the Appalachian League for several years and have always been a proud supporter of my high school athletic teams at Bristol Virginia High School. I was member of the school board from 2008 until my election so that brought me closer to be as proud supporter of the Bearcats.

What are some of your favorite songs on your music playlist?

I do not have an actual playlist and really enjoy listening to Christian music (Contemporary and Gospel). If I listen to any music outside of that then I have to confess that I am an outlaw country music fan but more importantly a giant Willie Nelson fan. I love his genre and all of his duets especially with Ray Charles and of course Waylon Jennings.

What is your favorite book?

My favorite book is the Bible. I also enjoyed reading the Art of War as well as Stephen King novels.

What sports/teams do you root for?

Okay so I am all over the place with favorite teams. University of Tennessee and Wake Forest (college), Pittsburgh Steelers (pro football), Pittsburg Penguins (pro hockey), Cincinnati Reds (MLB) and the Philadelphia 76ers (NBA). I love NASCAR and was a big Dale Earnhardt Sr. and Dale Jr. fan. Since Dale Sr.’s passing I have become a big, loyal Kevin Harvick fan.

What drew you to law enforcement?

I have always lived in Southwest Virginia and in my teen years there was a coal strike. In the newspaper there was a photograph of a Virginia State Police in his Class A uniform holding his shotgun against his hip as a line of coal dump trucks lined the street. I said that is what I wanted to be. So I was going in the Air Force and then become a State Police; it is funny how God had other plans. I went to a local college on a basketball scholarship while working in a floor care products (Electrolux) plant. Twenty-four years later my dream to be a police officer came true for me.

What did you do before being elected to the office of sheriff?

Before I was elected Sheriff for the city of Bristol, I was employed as a policeman with the Bristol Virginia Police Department for 22 years, where I was Detective and held other specialized training. I also was elected to the Bristol VA. City School Board in 2008 until I had to resign to become Sheriff. As a School Board member I achieved the honor of being named the Virginia School Boards State President in 2018-2019. All this was after working at Electrolux Corporation after high school from 1976 to 2000 for 24 years.

If you could have any superpower, what would it be and why?

If I had a super power I think it would be super speed because I love doing different things at different events and there is not enough time tin the day to do so. I want to do everything I can for as many people as I can and that is a hard thing to do. Again, I always want to inspire to be the difference.

If you could visit any place in the world, where would it be?

If I could visit any place in the world I would love to visit the Holy Land. I have always been intrigued with reading about certain places in Israel.

What are you most proud of?

I am most proud of my family. My wife, 5 children and 4 grandchildren are what I live for; to see the family we have become and the young men and women they have become really makes me proud.

My favorite movies are a mix. I have always been a Batman fan as well as Star Wars. I also loved the Godfather series as well as Westerns.

What character trait do you most admire in others?

Tyrone Foster was elected Sheriff for the city of Bristol Virginia on November 2nd 2021 and took office on January 1, 2022. He is a life-long resident of Bristol Virginia and a 1976 graduate of Virginia High School. Foster also attended Bristol Commercial College while working full time at Electrolux where he was employed for over 24 years and held several positions. In 2000, Foster was hired by the Bristol Virginia Police Department. He is a 2000 graduate of the Southwest Virginia Criminal Justice Training Academy. Foster served as a Patrolman, Detective, Field Training Officer, Crisis Negotiator, Gang Investigator, member of Bristol Virginia Police Honor Guard and represented the department as a member of the Veritas Adult Drug Treatment Court. Foster is a former Police Instructor with the Southwest Virginia Criminal Justice Academy. Before coming to the police department, Foster volunteered in little league basketball, football, baseball and softball as a coach.  Also, he was a member of the VHSL Appalachian Officials Association where he officiated high school basketball for 18 years. In those years Foster officiated numerous State Championship games. Foster has served as the PTA/PTO President of Stonewall Jackson Elementary School and the Vice-President of Virginia Middle School. Foster is a past board member of the BVU Authority Community Broadband Integration Group and the East Tennessee/Southwest Virginia Executive Board of the Fellowship of Christian Athletes. Foster currently serves as a member of the Bristol 2040 Vision Steering Committee and also is a member of the Bristol Professional Baseball Board of Directors which is now affiliated with the Bristol Stateliners of the Appalachian League. He was elected to the Bristol Virginia School Board in 2008 as a write-in candidate. He was re-elected in 2012, 2016, and 2020 where he has served as Chair and Vice Chair. As a School Board member Foster was elected to the Virginia School Boards Association Board of Directors as its Southwest Region Chair for two (2) years and then as its Member At Large for two (2) years. Foster was then elected as President-Elect in 2017 and was elected President in 2018. As President of the Virginia State School Board, Foster has been selected to serve on the Governor’s Student Safety Work Group, The Virginia Department of Criminal Justice School Law Enforcement Partnership Advisory Committee, The African American Superintendent’s Advisory Council, The Students and School in Challenging Environments Taskforce and also represented Virginia and the Southern Region of the United States as a member of the National School Boards Associations Policies and Resolutions Committee. He is married to Becky Hicks Foster and has 5 children and 4 grandchildren who are all proud members or graduates of Bristol Virginia Public Schools. He also is a member of Fellowship Chapel Church where he is active as a security team leader and a van driver.