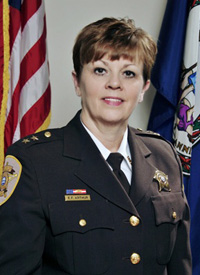 I’ve been with the sheriff’s office for 27 years. My predecessor ended up getting a job as the executive director for the National Sheriffs’ Association after he’d just been reelected. He came to me and said, “I would like you to replace me.” It wasn’t on my radar. I was the director of administration. I had a less-than-3-year old and a less-than-6-year old at the time. So it was like, “Whoa.” My husband was so enthusiastic. He said: “The chance may never come around again, so you gotta go for it. We’ll figure it out.” That was 13 years ago.

Sheriffs are elected. We answer to citizens. When I ran, I put my face on the posters because I am a female, and my campaign manager wanted people to know that. Also, people want to see who they’re putting into office, so I think it’s important, even though I do get tired of seeing my face all over the place. Women are different at this; we have a different perspective. For example, after September 11th, we had all these conversations [on] what sheltering in place would look like. Some ideas were to keep the kids in school for three to four hours, or even two to three days. I was like: “Are you kidding? How do you plan to keep those parents from their kids?” And someone said, “Beth, are you a sheriff or a mom?” I am both. You can’t take one out. They both live in one person, and that’s how I see the world, that’s how I operate. On September 11th, I’ll never forget my husband calling me from D.C., yelling — not at me, but just out of concern — that I had to go get the kids. I was like: “Hello, I’m the sheriff. I can’t just leave.”

A lot of inmates recognize me. Most of the people we deal with in our jail are not bad people; they are people who make bad choices, have substance abuse problems. They get mixed up in the wrong crowd. They’re not evil, mean, terrible people. They just do stupid stuff, and often they do it over and over and over and over again. It often starts with low self-esteem. That leads to drugs, then they steal to get money for drugs, so it just keeps getting worse. But I’ll be in the grocery store, and they’ll come up to me and say, “Hi, I was in your jail.” They’re out, they’re sober, they have a job, they’re married. They’ve got their lives back on track. They want to thank me. They’re proud of where they are now. That reflects on our staff. You have to care about the people you incarcerate. You can’t be cavalier about locking someone up. You can’t stop seeing them as human.