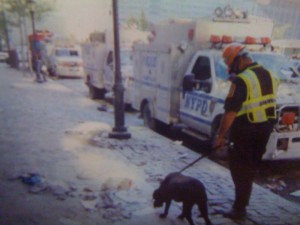 On January 28, 2014, retired Spotsylvania County Deputy and owner/handler Toby Owens lost a dedicated partner. His K-9, Sydney, passed away. Toby Owens was a Deputy in Spotsylvania County from 1988 until 2009. He was in charge of a squad that consisted of deputies and K-9 partners. He also worked with the U.S. Army Criminal Investigation Command for 20 years working both in the U.S. and internationally as an Intelligence Officer.

His specialty with the Sheriff’s Office was serving as a Human Remains Detection K-9 handler and member of the Search and Rescue Team. This specialty was both a blessing and a curse. While he excelled at both and shared his knowledge with many, it also meant a definite deployment to Ground Zero at the World Trade Center. Toby Owens went with his then 9 month old Labrador Sydney. They began their gruesome assignment just four blocks away from the devastation of the towers. Their first mission when they arrived in New York City was clearing the street of body parts.

Sydney got completely confused when Owens let her out of the truck. Taught to sit when she detected the scent of a body, Sydney was overwhelmed by so much death and sat on the soot-covered sidewalk and refused to get up.

From an article on September 21, 2001 in the Free Lance Star, Toby Owens was quoted as saying: “It’s hard to comprehend what it was like up there,” said Owens, also a Vietnam veteran. “At nighttime, with all the flood lights, it looked like Hollywood making a movie. I kept thinking I was going to wake up any minute.” They worked long days and nights in the smoke and rubble, doing a job few others wanted to do. Cadaver dogs are really no different than drug dogs or bomb-sniffing dogs, except they are taught to pick up the smell of human remains.

Cadaver dogs are trained to sit when they sense a body. A reward for a job well done is a game of fetch with a rolled-up towel. Sydney wouldn’t work for toys, only praise. “All she wants is a hug and some love,” Owens said. (Free Lance Star – 9/21/01)

The contributions of both Owens and Sydney over the years cannot be fully expressed in words, understood in thought or appreciated in their totality. The love and devotion of an animal of this nature is only known completely by those that handle these types of dogs. Their service is selfless and immeasurable.

In 2012, Senate Joint Resolution 174, sponsored and presented by Senator Bryce Reeves, was presented to Toby Owens at the Annual Awards Banquet of the Spotsylvania Sheriff’s Office commending him for his service to his Country and County. For all you have done Toby, we thank you and join you in mourning the loss of Sydney.