In July, Deputies S. Cecere, D. Jackson and K. Person received their certificates for completing the Basic Jailors course. They were among the 27 graduates from five agencies who walked across the stage. The motto of Class 16-2 was “One Sight, One Fight.”

Also in July, Deputy D. Covington, Jr. graduated from the 16-week Basic Law Enforcement course, joining 22 others in Class 16-A.

On August 4, Sgt. C. Vincent, Sgt. C. Woodhouse, Cpl. G. Robertson and Sgt. N. Jones completed the 64-hour Leadership Institute course. This program highlights emerging leaders in the ranks and challenges them to think about their role at Newport News Sheriff’s Office and ways to strengthen the department. 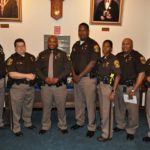 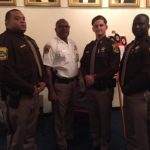 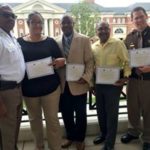