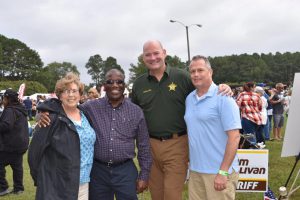 What a night! On Wednesday, October 6th, 2016, Sheriff Jim O’Sullivan and the Chesapeake Sheriff’s Office welcomed thousands of hungry visitors to the Chesapeake City Park for the 37th Annual Great American Food Fest. This year’s festival was bigger and better than ever, with more than 60 vendors.

All proceeds will benefit the Chesapeake Sheriff’s Office Charities fund and Ruritan Community Projects. We would like to thank our partners the South Norfolk Ruritan Club, plus all of the vendors, volunteers, and staff who made the event such a big success!