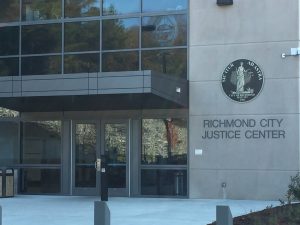 Sheriff C.T. Woody, Jr. is proud to announce the graduation of the 5th Basic RCJC Recruit Academy class which will take place tomorrow, November 10, at the Richmond City Justice Center. 15 individuals comprising of ten men and five women from various backgrounds including military service, first response teams, and security and loss prevention will be presented and pinned with their official sheriff’s badges during a graduation ceremony which will be attended by Sheriff Woody, academy staff, sworn and civilian members of the Richmond City Sheriff’s Office, and family and friends of the recruits.

All required training was tracked electronically and reported to the Department of Criminal Justice Services (DCJS). In order to graduate, each recruit must complete the curriculum requirements, successfully pass a series of written exams, meet qualifications standards in defensive driving, firearms, and defensive tactics, and pass the final examination.

“These men and women have chosen a demanding career during difficult times for law enforcement all over the nation,” stated Sheriff Woody. “They’ve chosen to give of themselves to ensure the safety of their fellow citizens. I am proud to be their Sheriff, and every member of my agency welcomes them and will be proud to serve alongside them.”

Chief Magistrate of the City of Richmond Gary Woolridge will serve as the commencement speaker and Lieutenant Colonel Roy Witham of the Richmond City Sheriff’s Office will perform the ‘Swearing In’ of the 5th Basic Academy Class. During the graduation, appointed friends and family members of the recruits will be allowed to administer and pin the deputy badge on their graduating family member.