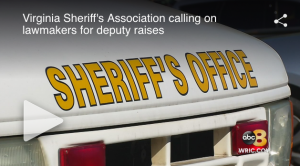 If you’re starting out as a sheriff’s deputy in the state of Virginia, chances are you’ll make just over $31,000 a year. To offset some of the financial burden, many localities receive supplemental funding from their jurisdictions.

But for those serving in areas that do not receive a supplement, many deputies have found themselves in the welfare line.

“Those deputies cannot meet their families’ financial obligations,” said Anna Denton, Human Resources Manager for the Chesterfield County Sheriff’s Office. “That means deputies who are serving the public simultaneously have to get public assistance just to put food on the table.”

Denton added that the need for deputy raises is dire.

“Thankfully, here in Chesterfield County, our deputies do get to realize a supplement,” she said. “If you have a family of four, they absolutely run the risk of falling below that poverty line.”

Now, The Virginia Sheriffs’ Association is calling on lawmakers to fix the “compensation crisis” with the goal of easing the strain for other localities.

Delegate John O’Bannon (R) of Henrico, who sits on the House Appropriations Committee, says the problem comes down to state revenue.

“We all would very much like to do more for our sheriffs. Rightly or wrongly, their raise was part of the bigger package that included not only the state police but also all of your state employees,” he explained. “So, when we did not meet our revenue projections, those, for the time being, went away.”

Currently, seven localities in the state do not receive any supplemental funding, though O’Bannon says state support still comes through the Compensation Board, Career Development, and jail per diem.

However, things may be improving, if only slightly.

“We heard actually a guardedly optimistic report yesterday that the finances for the state are picking up a little bit,” O’Bannon said. “We’re still lagging behind in the sales tax.”

At a 21.3 percent turnover rate, Denton says the current situation is hurting recruitment and retention.

“If we don’t get this money, we significantly run the risk of losing highly motivated and highly educated and highly trained sheriff’s deputies,” Denton said.

Del. O’Bannon says he would like to give deputies a raise, and that will happen if the economy allows.