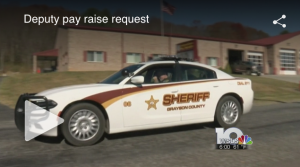 The Virginia Sheriffs’ Association wants to make sure deputies get a pay raise for the upcoming fiscal year.

Members in the organization said the average pay for a deputy sheriff is $31,000 and if they have a family of four, they can qualify for food stamps.

The association said the General Assembly previously approved pay raises for the state troopers and its hoping deputies will get a bump up in pay as well.

Jordan Johnson has been with the Grayson County Sheriff’s Office for four and a half years and has been in some difficult situations as a deputy.

He still comes to work, despite the dangerous job, but in order to make ends meet, he has to work seven days a week.

On his off days, he works on a farm and had to adjust his living arrangements.

Grayson County Sheriff Richard Vaughn said the pay has had an impact on his department.

“In the past year, we have lost three deputies to other agencies right here in Grayson County,” Vaughn said.

Vaughn, who was the past president of the VSA, said the turnover rate for a deputy in Virginia is 21.3 percent and the last time there was a pay raise was about three years ago.

He feels getting a pay raise would help retain and attract deputies to his department.

“Our guys, our deputies are working around the clock to 2-3 o’clock in the morning answering calls, very dangerous job. They shouldn’t have to come into work worrying about how they are going to provide for their families,” Vaughn said.

He said there is a disparity in pay between a deputy and state trooper.

The VSA said it wants the general assembly to approve a 2 percent raise across the board for all deputies.

“It won’t solve all the problems but it would go a long way for improved morale if we back what we lost,” John Jones the Executive Director of VSA said.