Behind the scenes: Food service at Newport News City Jail

Overseeing the preparation and delivery of 1,350-1,650 meals a day to inmates in the Newport News City Jail doesn’t faze Kenneth Peare.

He’s used to feeding large groups on a schedule, having been part of food service during his 20 years in the Navy.

“It was the same kind of job. It’s a big amount of people to serve,” he laughs.

As food service director for CBM Managed Services, the contractor for inmate food, he makes sure each person behind bars receives breakfast, lunch and dinner.

His day usually begins around 8 a.m., but the people he oversees are hard at work much earlier.

From his office next to the kitchen, Peare oversees six employees from CBM and as many as 26 inmates who help with food service. He makes sure food ordered from suppliers has arrived, that the meals meet dietary guidelines — many inmates require special meals for health reasons — that the meals are cooked correctly, served on time and that everything is returned for cleanup.

He runs an orderly food service system that meets mandatory requirements for the inmates to have three meals within 12 hours.

Even the smallest change during mealtime can make a big difference.

“We’re starting a new thing. Now, when food service begins, we don’t do anything else in the jail until it’s done. We start off with one floor and we finish with the last cart. We don’t stop in-between. This way, the commissary people, the medical personnel — those who need to go through the floors — aren’t being interrupted by us and they’re not in the way of us serving,” he explains.

Within a half hour of serving the last meal of the shift, the food trays are being picked up and everything’s done on the floor.

The food service personnel also prepare the bag lunches for work release inmates. They have breakfast in jail. Lunches are put in a container to stay cool and go on the road with the workers.

Those inmates return to the jail in time for dinner.

The kitchen in the Newport News City Jail is a familiar place for Peare. He came here as the kitchen supervisor after getting out of the Navy in 2003. He left for 10 years but has returned with CBM.

While some things have changed, many of the Sheriff’s Office employees he first worked with are still here.

“They’ve all gone up the rank structure. That’s so cool. We didn’t see each other for 10 years, but they’re all the same. They’re hard-charging people and they want to do a good job for everybody.”

Like them, he’s been promoted along the way, reaching the top spot in December 2016.

Peare is laser-focused on getting inmate meals done correctly and tasting good. 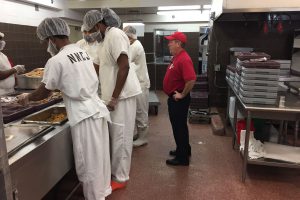 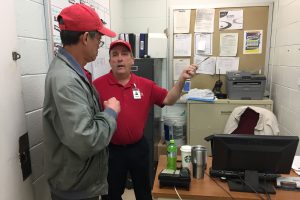 Ken Peare in his office discussing food service with a CBM employee. 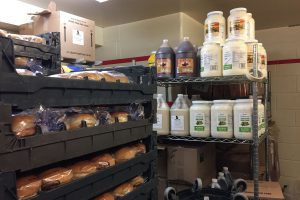 The storage room is full because food was delivered on March 8. 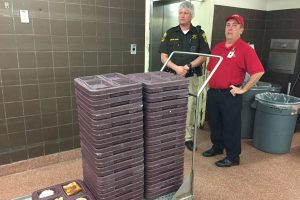 Ken Peare stands with a deputy who will work with inmates to deliver lunch.