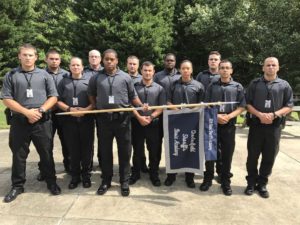 The Chesterfield County Sheriff’s Office 30th Basic Academy headed to a local Toys “R” Us recently to collect new toys or monetary contributions to purchase new toys for children impacted by the recent hurricanes that have hit the United States. The toy drive was inspired by Meaghan, the daughter of Lauren Seals, a member of the 30th Basic Academy.

This is Meaghan’s story: “In October 2012, when I was five-years-old, my family lost most everything we had to Superstorm Sandy. We had to live with friends and then in half a house while ours was rebuilt. I lost my toys and art supplies. It was very hard. My grandma and grandpa and aunts lost everything too. But a lot of people came to help. As Christmas approached we didn’t even have a living room for a tree. But on Christmas morning there were more presents and toys for me than I could have wished for. Mommy and daddy told me later when I was older that many of those gifts came from strangers who just wanted to help. I learned that I received gifts from the Dix Hills Fire Department, Commack Ambulance, LiveOnNY, Darius Rucker and Heidi Klum! On my 10th birthday this year I saw what happened in Texas and I want to help kids there like people helped me. I don’t have money and I can’t really re-build houses but I want to give those kids toys like people gave me toys. I was so happy and grateful that people helped me feel normal again back then – it may seem like just a toy or that there are more important things to give, but I can tell you it meant the world to me.”

Thank you to everyone who came out and helped the sheriff’s office fill its truck with toys for the children in Texas who lost everything to Hurricane Harvey. The toys will be sent down to the Harris County Sheriff’s Office in Texas on Friday.