Sheriff takes on bullying in new book for kids 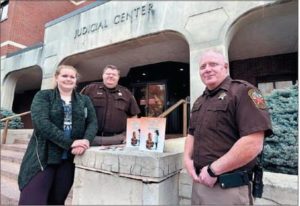 By REBECCA LAYNE
The Winchester Star

Winchester City Sheriff Les Taylor has picked up the pen again and created the second installment in his Deputy Knowles children’s series.

The 22- page paperback is called “ Deputy Knowles Makes a Difference” and is a fictional account of a girl named Abby who is being bullied at school.

“We wanted to keep the series going,” Taylor said. “We thought bullying in middle school was somewhat of a problem, so we wanted to tackle that.”

The book was made through CreateSpace and took Taylor about an hour to write.

Sibert said one purpose of the book is to show kids that police and deputies are friendly and will help them.

“We continue to provide community- oriented services to the public and children and provide positive law enforcement experiences to every child we encounter,” he said.

“I don’t think any law enforcement officer is in it to arrest people. They want to make a difference in the world.”

Myers, who currently lives in West Virginia, created the book’s 11 digital illustrations — all from her imagination — over the course of two to three months. She said she liked creating content people can both enjoy and be educated by.

“To see it unfold the way it did with positive feedback … I count my lucky stars, or badges in this case, to be a part of it,” Myers said.

The book can be found on Amazon.com for $13.
All proceeds from the book sales will benefit the Winchester Sheriff’s Office Foundation. Already, Taylor said staff at local middle schools have reached out to him about presenting the book at their school.

Taylor said the third installment in the series will likely be about drugs and high school, but it’s still about a year away.