On Saturday, September 22, 2018, the Franklin County Sheriff’s Office was present at the Boones Mill Apple Festival. The Franklin County Auxiliary Deputy Program, COPS personnel were assisting with traffic all day. Weather held off to allow a great day. Congrats to the Boones Mill Apple Festival organizers for producing another fantastic community event. 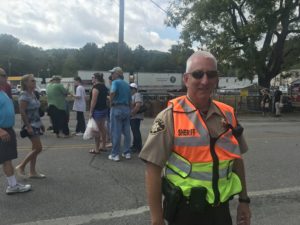 Sheriff Bill Overton has the Franklin County Sheriff’s Office helping residents with food delivery. Partnering with local growers and in conjunction with United Way of Franklin County, FCSO assists in distributing when a surplus of vegetables are brought to the United Way.

“The United Way of Franklin County collects fresh, donated produce from local gardeners.  Due to a short shelf life, these items need to be distributed quickly. The Office of the Sheriff steps in, when possible, and helps deliver this produce throughout the county,” Sheriff Overton said in a statement. 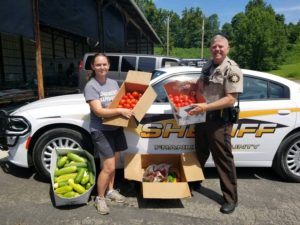 On Tuesday, September 25th the Franklin County Sheriff’s Office attended the Lake Christian Ministries Walk To End Poverty. The original event was postponed due to Hurricane Florence. Nearly 200 residents came out to support this worthy cause. Deputy H. L. Nolen was on hand representing the Office of the Sheriff. 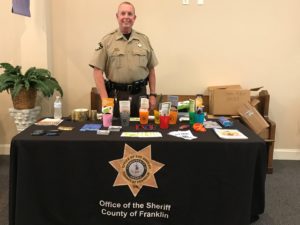 Deputy H. L. Nolen representing the Office of the Sheriff at the Walk to End Poverty.

Recently, Lt. Jonathan Holley and Lt. Ken Holland were invited to speak with Boy Scout Troop 130 at Epworth United Methodist Church. Holley and Holland spoke about the duties of a deputy sheriff and were able to display a patrol vehicle along with the Emergency Response Team unit and equipment. Thanks to Scout Master Wayne King and Assistant Patrol Leader Colin Hendrickson for setting this meeting up. FCSO had a great time. 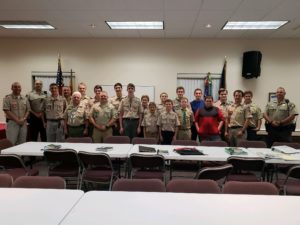 Recently, Lindsey Coley, Attorney, held a Grand Opening at her new office in Bridgewater Plaza, Westlake.   A large group of community residents were on hand to welcome Lindsey and her staff to Westlake, along with the Office of the Sheriff. 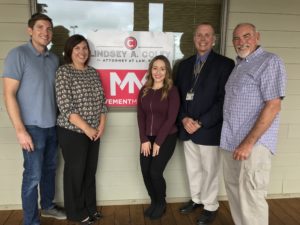 Recently, Sheriff Bill Overton spoke to a group of seniors in the Ferrum Community.  Sheriff Overton talked to the attendees about protecting themselves from scams. The discussion centered around phone calls that attempt to entice or frighten the residents to send money. “I want this great generation to have information that can keep them safe, “ Sheriff Bill Overton said. 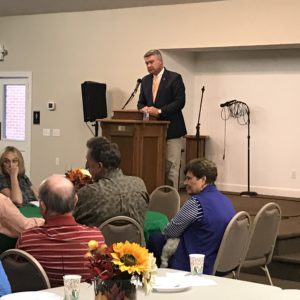 Sheriff Bill Overton speaking to a group in the Ferrum Community

The 30th Annual Smith Mountain Lake Wine Festival was held September 29-30, 2018. The Franklin County Sheriff’s Office was there to assist in traffic, patrol and community. Pictured: Cpl. Megan Patterson, Lt. Erik Mollin and Captain Justin Sigmon. Our bicycle patrol was also present  with Deputy Ryan King and Lt. Terry Dameron. Thanks to all that made this event a success.

On Monday, October 1, 2018, the Franklin County Sheriff’s Office was a part of the Teens – N – Tots Event at the High School. Teens – N – Tots is a local group where teens work with youth to create friendships of positive interaction.  FCSO Deputies McKay, Burton, Haynes and Dameron, along with K9 Rex and Titan, came to produce K9 demos, speak with the group about law enforcement duties, show them a patrol vehicle and interact with the youth. Thanks to Coordinator, Jessica Leftwich. 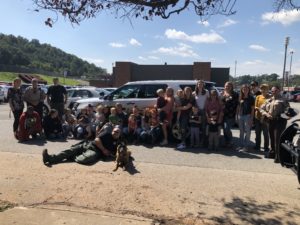 On September 28, 2018,  Deputy Anthony Hodges attended the St. Jude’s Trike A Thon at Little Lambs Christian Preschool. The children collected donations, and each child got to ride in the Little Lambs Town located at Mary Elizabeth Park in Rocky Mount. The town included a cafe, library, car wash, and police station. Deputy Hodges staffed the police station to promote safety and positive relationships with law enforcement. 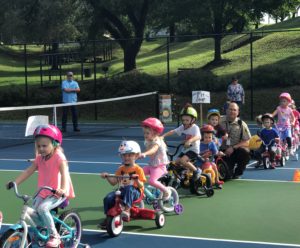 Franklin County Sheriff’s Deputy Hodges at the Trike A Thon.