Cancer – a word that causes fear, worry, anxiety and many other emotions.
Pink – a color that stands for hope, survival, overcoming, remembrance, support.

Add pink to the brown and gold of the Newport News Sheriff’s Office this month.  Many deputies are wearing pink badges to show support for Breast Cancer Awareness Month. Sheriff Gabe Morgan said yes when deputies asked if they could buy and wear pink badges in October.

The badges were ordered months in advance to ensure they’d arrive in time.

On October 1, they replaced the traditional gold-tone badges and put on pink.

Two of deputies are breast cancer survivors.  The good news is both Lt. K. Gross and Cpl. M. Jones have been cancer free since undergoing treatment. They say they’re lucky – their cancer was caught early.

The American Cancer Society states breast cancer is the second leading cause of cancer death in women.

“I missed my mammogram in 2015 and the cancer was detected in 2016.  I have learned to take care of myself. I don’t miss any appointments now,” she says.

Lt. Gross missed hers, too. She just had a feeling she needed one, so she made an appointment. The NNSO’s Community Resource Officer has been cancer free for three years now.

She says the badge often starts conversations about cancer – whether it’s talking about her journey or listening to what someone else has gone through.

“When I speak to groups or even when I’m just walking to and from my car, people stop me and say how much they like it.  One man stopped me on the street and said, ‘Let me see that pretty badge.’  A woman entering the courthouse saw one of our deputies wearing the pink badge and got choked up. She told the deputy she was a breast cancer survivor,” Lt. Gross related.

“It’s important to show my support for my co-workers and for those who are fighting or have battled breast cancer,” said Cpl. G. Robertson.

Cpl. Jones admits the treatment was rough, but she calls the discovery of her cancer a blessing. “I’m blessed. It was found so early. It saved my life,” she stresses.

Wearing the pink badge shows people that we who wear the uniform are human beings, too, many of us are going through the same things they are and are fighting the same battles they are,” Lt. Gross adds.

Every time I hear cancer free, I’m overwhelmed with emotion. I’m thankful for the support from my NNSO co-workers and my family,” says Cpl. Jones.

Both deputies want to remind people: get checked, learn how to do a self-exam, ask questions.  As the Nike slogan says ‘Just Do It.’ 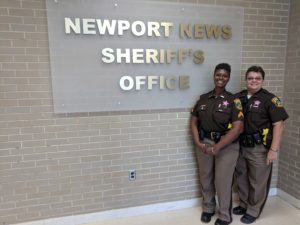 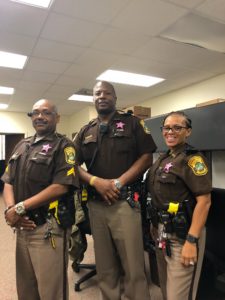 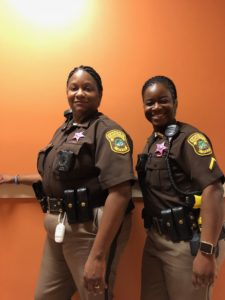 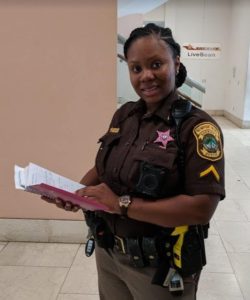 Deputy Fulton in her pink badge 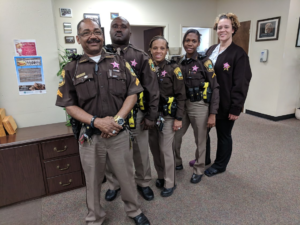 NNSO Deputies with their pink badges 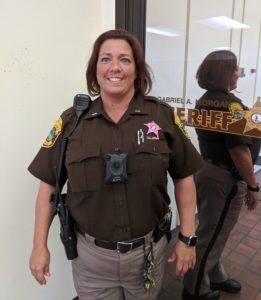 Lt. Daniels with her pink badge on