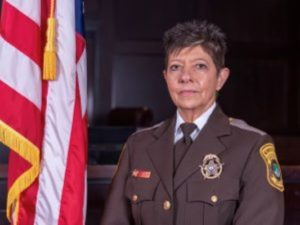 When Eileen Sprinkle applied at the Newport News Sheriff’s Office, she didn’t know all the duties and responsibilities she would have.   When she learned she’d be supervising inmates, she said, “Why not? I’ll try it.”

33 years later, she has decided to try something new – retirement.

“It’s been a rewarding career,” she said.

Col. Sprinkle leaves September 1 and her role as chief deputy, second in command to Sheriff Gabe Morgan.  She began her career where all deputies start – working in the jail.  It was 1988 and she was a floor deputy on the midnight shift.  The schedule meant the newly single mother of two had to juggle odd work hours and finding sitters for her children.

“That was a challenge, but the job meant stability.  I had a steady income, health care for my family and, as I looked down the road, I knew a pension/retirement income would be important.”

In 1988, corrections was a traditionally male field.  Col. Sprinkle is modest when she talks about breaking the glass ceiling in corrections here.   On her way up the ladder of success, she held many positions that gave her the knowledge and confidence she’d need to be a leader.   Floor deputy, Records director, Jail Administrator, Operations Bureau chief and finally Chief Deputy.

Among many firsts for the NNSO, Sprinkle became the first female jail administrator and was promoted to major in September 2000, she was appointed Lt. Col. in 2009, and in 2011, she made history one more time.  Sheriff Gabe Morgan elevated her to Colonel.

“There are many reasons women can have a career working at the Newport News Sheriff’s Office – the schedule, the benefits, the opportunity for advancement.  Women make up 41% of our sworn staff; in leadership, five of the seven people on the command staff are women.  The sky’s the limit.”

Col. Sprinkle knows her departure will allow others to move up the chain of command and she’s excited for that.

“The sheriff has a deep bench of talent to call on to carry out his vision for this agency.  They will bring their knowledge, experience, and a fresh perspective to the table.”

The support of Sheriff Morgan and so many others over the years made her decision a bittersweet one.

“A friend told me I would know when the time is right.  She was right. It’s the right time for me.  I’ll miss seeing the people who have become like family, but I’m staying in the area. We’ll stay connected.”

Retirees often say, “I’ve never been busier.”  That will be true for Sprinkle.  She works out daily; she enjoys outdoor activities like boating, wake boarding, hiking and yard work.  With friends from coast to coast and family to visit with, you’ll need a GPS to keep up with her.

Her last weeks are filled with finalizing projects, getting people up to speed on upcoming initiatives, organizing and distributing files and clearing her office of the personal items that made it a second home of sorts for her.

Reflecting on her career, Col. Sprinkle says it was the right job at the right time.

“The Newport News Sheriff’s Office has filled a large part of my life.  This has been a good career.  I went a lot farther than I ever imagined.”

With respect for your years of hard work and dedication to the Newport News Sheriff’s Office and this community, we say congratulations and enjoy your retirement, Col. Sprinkle.